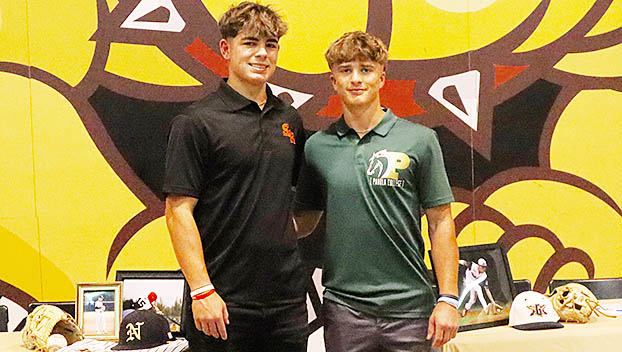 Noah Kendrick and Gage Driskell sat in the Dog Dome with family, friends and coaches to celebrate the ability to extend their playing careers into the next level.

“This is a special day for both of them,” Nederland Athletic Director Monte Barrow said. “I know they have been looking forward to this for a long time. This is more than a signing. This tells us where they are going to go after they finish here. And they aren’t finished here yet.”

Driskell signed to play baseball for Panola College in Carthage.

“It feels great, but the job is not finished,” he said. “We can’t get too complacent.”

Driskell said he will miss the bus rides and time spent with his teammates the most. He said the team has the goal of a deep playoff run in 2023.

“I have high expectations for this team,” he said. “I just want to be a good leader for the younger kids.”

Driskell is proud to be able to share the moment with his longtime teammate.

“Me and Noah have played baseball together since we were little,” he said. “We just have that connection. It just feels great to be able to go into our senior year, knowing we have both committed to colleges.”

“It feels good to know my worth and that I have a future in front of me,” he said. “It doesn’t end here. I picked them because they are a competitor every year. They usually win their conference. Their ultimate goal is always Omaha. That staff really stuck out to me, and they treated me like family.”

Kendrick said he wants this year’s Nederland squad to “put a stamp on the season.”

Nederland baseball coach Kyle Green has only held the position since June, but said the two seniors have stuck out to him with their work ethic.

“To see the focus they have had and the traveling across the country playing the game they love, it is really paying off for them,” Green said. “It has been fun to watch. I look forward to watching these guys. Hopefully they don’t get satisfied with a piece of paper and we get to watch them play for a long time.”

Kendrick and Driskell will join their teammates for their senior season in the spring.