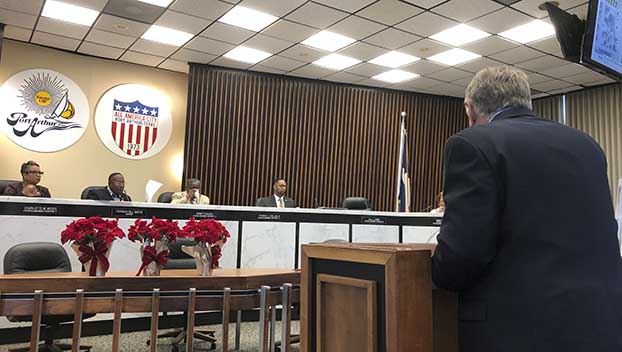 Construction on a $10 million project to beautify Woodworth Boulevard from Lakeshore Drive to Gulfway Drive is expected to begin in summer of 2023.

“We’re looking at rehabbing the pavement and widening the sidewalk on the outside of the street to about 16-17 feet,” Cannatella said. “That will provide room for a sidewalk on either side of Woodworth. And then, of course, we’ve got ornamental light fixtures that we’re planning on using — the same that are down there now — and bring that forward all the way to Gulfway.”

Parking near Lakeshore Drive is also being addressed in the plan.

“On a nice day we’ve got a lot of people that park down there and walk the levee,” he said. “So I think parking is going to be an issue that we want to address. We looked at adding some parking in front of the Rose Hill building; that’s still an option.”

And an additional portion of the project is landscaping, which will include the addition of irrigation. 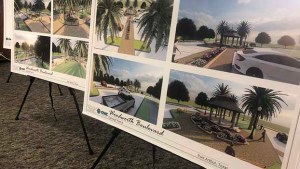 Pictures from a streetscape concept were displayed in Council Chambers for visitors to view. (Monique Batson/The News)

“As you know right now we have live oaks,” he said. “Some of those are not doing real well.”

“This is an awesome project that I’m very glad to see,” said Councilwoman Ingrid Holmes. “The area does attract a lot of people on beautiful days like today. This afternoon there will be a lot of citizens that don’t necessarily live in that part of town.”

“As I look at this…it’s almost like a vision, a dream come true before your eyes,” she said. “To see the main thoroughfare in Port Arthur to look like this is amazing.”

Cannatella said they currently have $3 million set aside.

“It’s going to be important as we allocate this money that we spend it,” he said. “If we wait four or five years, the prices will be higher. So I want to make that a priority that as we get the money we spend it.”

City Manager Ron Burton said the expected cost of the project is based on current prices, adding there was $10 million in the capital improvement plan that has yet to be allocated.

Burton intends to bring a resolution to council at the Nov. 22 meeting to put another $3 million into the Woodworth project.

“The whole idea as council mentioned was to make one of the main entrances to our city…very attractive — and not only for our visitors but for our residents,” Burton said. “A general sense of pride in our city.”