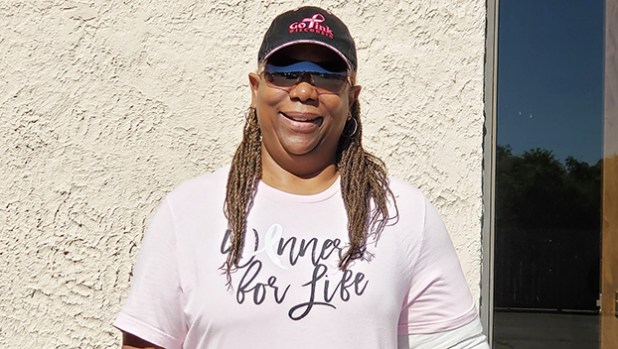 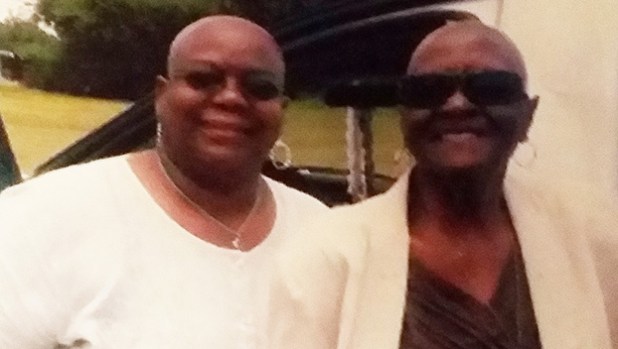 Jacquelyn Timmons, right, poses with her mother Mrs. K.M. Timmons. Mom shaved her head in support of her daughter as she battled breast cancer. (Courtesy photo) 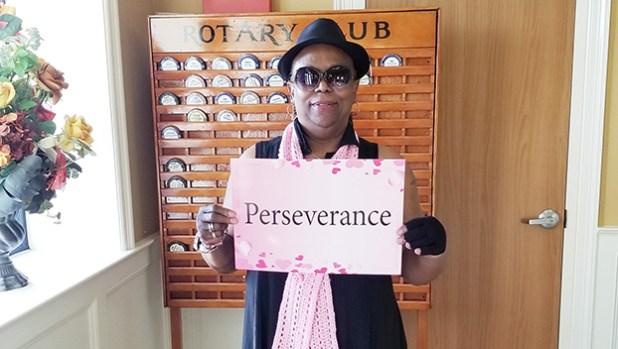 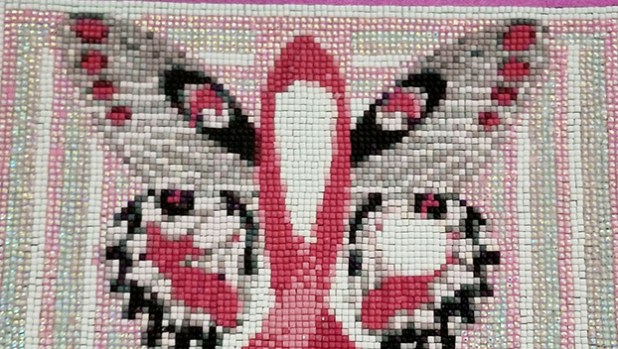 Breast cancer has taken a toll on the family of Jacquelyn Timmons.

Maternal and paternal aunts had to have mastectomies due to breast cancer. Her mother had multiple lumpectomies for fibroids in her breasts. At the age of 89, her mom was diagnosed with breast cancer and died in 2017.

Timmons, of Port Arthur, has always performed self breast exams and had mammograms, so when a mammogram in 2011 came back fine, she was still concerned after finding a suspicious area.

Being caffeine-sensitive, Timmons sometimes gets an odd spot in her breast that subsides after staying off caffeine for a while.

But this time it didn’t go away.

Months later she had a physical exam followed by a mammogram. That led to an ultrasound.

“At that point I know it’s not my normal,” Timmons said.

A biopsy was scheduled and the results came back May 1, 2012 — cancer.

An MRI showed the cancer had spread to her lymph nodes.

Timmons started with chemotherapy in Beaumont.

“It did shrink the tumor. I could actually feel it when I was doing my own exams and thought, wow, this thing is shrinking,” she said. “I went ahead, and they said I needed surgery. I had surgery two days before Thanksgiving.”

There were complications and related health issues. Leading up to her two-week post surgery mark, she remembers coming home from a church service exhausted.

Timmons didn’t know what was wrong and felt like she was going to fall asleep.

“M.D. Anderson (hospital) found out I had an infection. They said we could send you home with antibiotics but I ended up staying in the hospital for three to four days,” she said.

Timmons was unable to undergo a tooth extraction because her wound site was putting off fluid via tubes. The tubes were removed in February 2013 but there were more health issues.

“I was in bed one night and I turned over and heard this swoosh sound and thought. ‘what is that?’ I turned back over and ‘swoosh,’” she said wondering what was going on in the middle of the night. “I moved back and forth, it was me. Literally the fluid in me was making the noise. I had to go back and have the tubes put back in and left for six to eight weeks, which delayed radiation.”

It is widely known that cancer treatments often have side effects. She recalls getting overheated and sick during Sunday church service. Timmons laughed as she told of how every time her preacher would get up to speak she would overheat.

“He must have thought I was possessed,” she said with a chuckle. “I had very little response time. I would feel the sensation in my body, then get sick.”

She resorted to carrying a small cooler with her with an ice pack, water and a towel. When the sensation began Timmons could reach out to her mother or another lady at the church. They would use fans, pull out the ice pack and put it on her neck and back.

“They really took good care of me,” she said.

Timmons said the chemo sickness didn’t hit her until about the third day. She recalled walking to her mailbox, stopping halfway there, doubled over as if someone punched her in the gut.

“You can lie down and have a woe-is-me attitude or stay active,” she said matter-of-factly.

So she got her exercise in slowly, first walking to the back of her house, then the side. She kept it up until she made a full round around the house and made it part of her routine.

She noticed hair loss beginning with the second round of chemo after reaching up to scratch her head. She eventually shaved her head. Her mom shaved hers, as well, as a show of support.

Timmons underwent radiation treatments for five days a week, which was tiring. She kept her strength by walking the several blocks to the treatment location and took a shuttle van back to where she was staying.

When Timmons first felt the suspicious lump, she called the Julie Rogers Gift of Life who, in turn, helped her through the whole process, she said.

“That is an awesome program. I recommend it for anybody that needs it,” she said.

Gift of Life provides free medical care for vulnerable individuals, in addition to cancer and wellness education; outreach for all youth and adults. The program has become one of the largest cancer screening initiatives of its kind in Texas.

Coach Ingrid Holmes knows Timmons and called her the most amazing person.

“Anything Jacquelyn works to do, she will accomplish,” Holmes said. “She has had significant health concerns, but she has not stopped and she overcame them.”

Active Living After Cancer is a 12-week course that the Gift of Life oversees based on M.D. Anderson curriculum. It teaches about wellness and getting back to life after cancer, Holmes said.

“It teaches about working with your family members so they know the you that you become after your cancer journey,” she said. “It also teaches nutrition, the importance of nutrition and that most physical activity is extremely important after recovering from any type of cancer diagnosis. ALAC is not restrictive and is for any type of cancer, men and women in the community and there are no financial restrictions. We really want to see people participate and register.”

More information on Gift of Life can be found at giftoflifebmt.org or by calling 409-833-3663.

Timmons remains active after cancer and the other health issues she underwent, which include two strokes.

The aftermath of the removal of her lymph nodes left her with lymphedema in her left arm, but she goes about her business as usual. She normally wears a sleeve and at home wears a compression wrap.

“I still have medical challenges but I’m not going to let it get me down,” Timmons said.

She offered advice to others that have been diagnosed with cancer.

“Just fight,” she said. “Keep doing what you have been doing because that keeps your frame of mind in a good space. Keep going and don’t stop.”