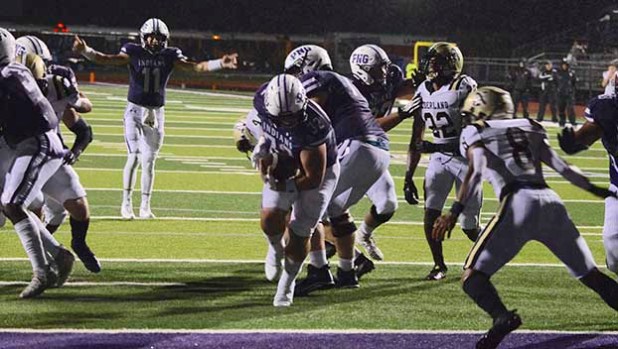 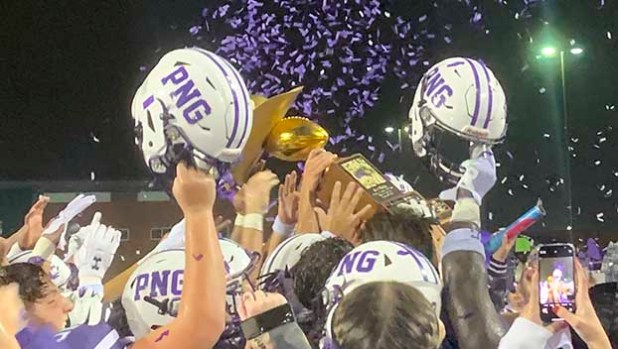 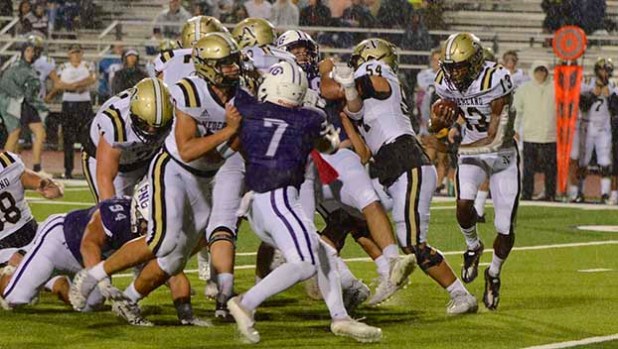 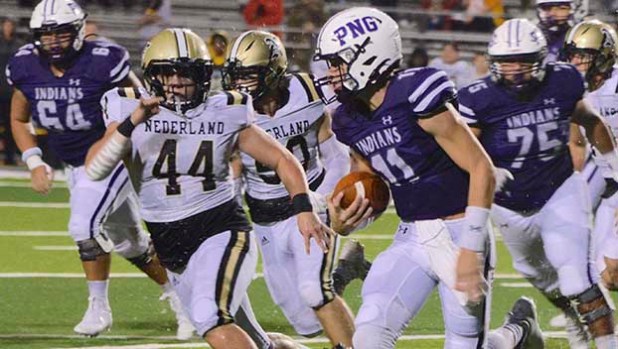 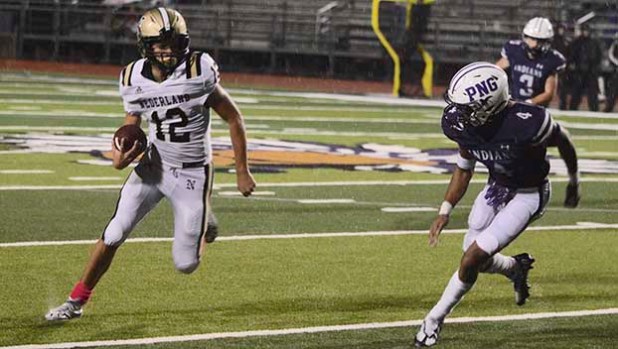 PORT NECHES – The 99th edition of Mid-County Madness was delayed 90 minutes due to lightning in the area. Once the game did start, it was a typical game between the Indians and Bulldogs. The records never seem to matter when these two teams play.

That was never more evident that in Friday night’s game. The lead changed hands twice in the final two minutes as Port Neches-Groves scored with :52 left to give the Indians a 26-24 win over Nederland in District 9-5A Division II action at The Reservation.

The Bulldogs scored on a 61-yard fumble recovery returned for a touchdown by Travis Roman to give Nederland a 24-20 lead with 1:45 left in regulation.

PNG (7-2, 5-1) drove 69 yards in seven plays. Cole Crippen hit Landon Guarnere for 37 yards to the Nederland 32. Crippen hit Prosperie for 5 and 12 yards. Crippen and Guarnere connected on a 15-yard scoring strike to give the Indians the lead for good.

Trailing 10-7 to start the second half, PNG drove down the field on its first possession of the third quarter to reclaim the lead. Shea Adams was featured prominently on the drive, scoring the go-ahead score on a 10-yard run to give the Indians a 14-10 lead with 5:37 left in the third quarter.

The Indians added to their lead early in the fourth quarter. Again, it was Adams scoring on a 3-yard TD run. The extra point was no good to make the score 20-10. Cole Crippen and Chance Prosperie connected three times on the drive for 19, 4 and 10 yards.

Mounting a fourth quarter comeback, Nederland answered the PNG score with one of its own. PNG tried an onside kick, trying to catch the Bulldogs by surprise, and it was recovered by Nederland at the 50.

That good field position jump started the scoring drive for the Bulldogs. A 26-yard completion from Ayden Sunday to Reeve Barrow was the big play on the drive. Sunday scored on a 7-yard TD run to pull Nederland within a field goal at 20-17 with 6:54 left in the game.

PNG took the opening kickoff and drove 56 yards for the game’s first score. The drive featured all rushing plays with Brock Hebert and Shea Adams doing most of the damage. Hebert capped the drive with a 4-yard TD run to give the Indians a quick 7-0 lead.

Unfortunately, that’s all the offense the Indians would muster in the first half. It was the Nederland defense that tightened up after that initial PNG drive. The Indians were also the victim of several bad snaps.

After stopping the Bulldogs on downs, PNG took over at their own 44. However, the Indians were not able to get anything going and were forced to punt. A bad snap led to Nederland getting the ball at the PNG 9.

It took all four downs for the Bulldogs to score. Ayden Sunday rushed for four yards on first down. Hubert Thomas was tackled for a 1-yard loss. Following an incompletion, Sunday scrambled for a 6-yard TD run to tie the game at 7-7 with 9:21 left in the second quarter.

After both teams were forced to punt after three-and-outs, PNG had a drive going into Nederland territory. However, a holding penalty negated a first down pass from Crippen to Adams. The drive stalled and Crippen lined up a little deeper than his normal shot gun position for a quick kick. But the snap sailed over his head and Nederland took over at the Indians 33.

Taking over with 2:15 left in the half, Nederland drove the ball inside the 10. However, the drive stalled at the 5 and the Bulldogs had to settle for a 22-yard field goal by Carter Piletere that put the Bulldogs up 10-7 heading into the locker room at halftime.

The play of the game was… Shea Adams scoring on a 10-yard run as PNG reclaimed the lead for good at 14-10 with 5:37 left in the third quarter.