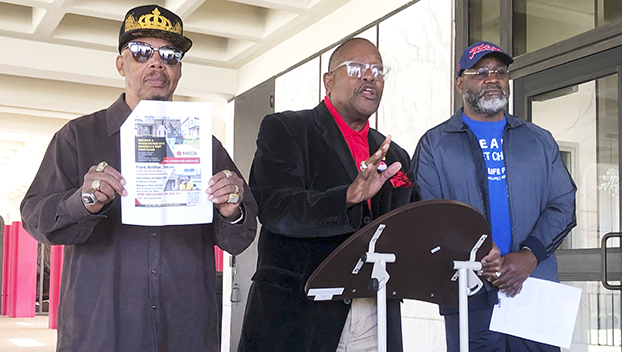 Mayor Thurman Bartie along with members of the city council on Thursday encouraged all Port Arthur and surrounding residents to inquire about a program that assists residents with becoming homeowners.

“We are proud to announce we have relief coming to all renters in need of affordable housing here in the City of Port Arthur, and even surrounding areas,” Bartie said during a news conference outside City Hall. “If you can afford to pay rent, then you can afford to pay that same amount in a mortgage … for your families and for your future.”

The mayor spoke of Neighborhood Assistance Corporation of America, which is hosting an event Saturday at Robert A. “Bob” Bowers Civic Center in Port Arthur from 9 a.m. to 1 p.m.

“That’s a program that I have actually partnered with and brought them here to the City of Port Arthur … that actually offers to everyone the opportunity to own their own home,” he said.

“No money down, no closing costs, no fees and your credit score is even not considered in your qualifications and abilities to pay.”

Bartie said NACA has more than $1 billion in federal funds to assist homebuyers.

The push in part assists Port Arthur with population numbers that, in recent years, was in danger of costing the city federal funding.

There was concern that 2020 Census numbers would show a population under 50,000 residents. Therefore the Complete Census County group was formed to personally reach “hard-to-count” residents such as those who are economically disadvantaged, minorities, undocumented immigrants and others.

Funding for programs such as WIC, SNAP (food stamps) and Section 8 housing are among those impacted by federal dollars granted to cities that reach more than 50,000 residents.

But programs such as that offered by NACA ensure future city government officials don’t face that same concern, Bartie said.

“We have a program for first time home buyers,” he said. “If you qualify, our rental assistance can be used to pay a mortgage.”

The target audience is families and those impacted by disability.