Veteran monument in region gets renovation it needed, according to VFW Post 4820 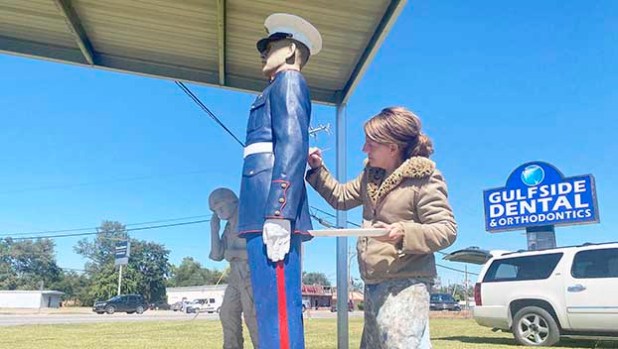 Melinda Bean, who is a local artist, volunteered to paint the statues. (Chris Moore/The News) 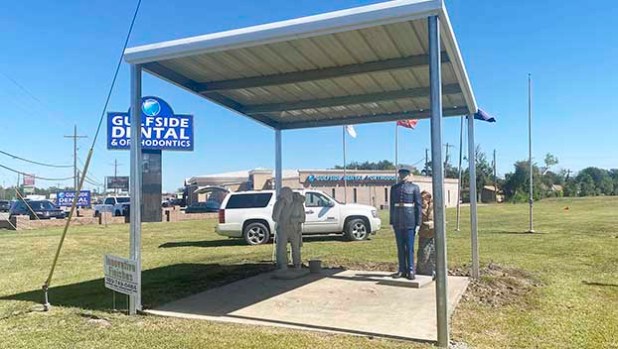 The monument is located at the corner of Texas Avenue and East Roundbunch. (Chris Moore/The News) 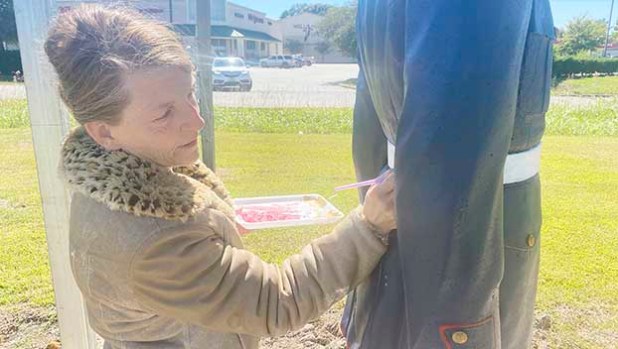 Melinda Bean paints the belt on the statue of the Marine. (Chris Moore/The News) 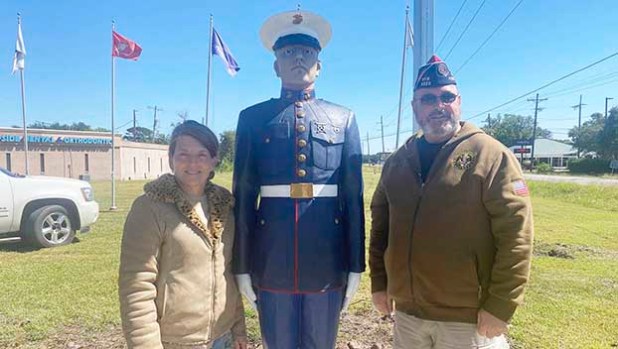 Melinda Bean, left, and Jorg Kitchen stand with one of the statues. (Chris Moore/The News)

BRIDGE CITY — A Bridge City veterans monument is getting an upgrade thanks to a local Veterans of Foreign Wars post and a volunteer.

Residents in Bridge City might have noticed the gun turret was recently removed from the corner of Texas Avenue and East Roundbunch.

Jorg Kitchen, VFW Post 4820 Commander and District 2 Commander, said the two statues that occupy the same property were also set to be moved until a sergeant with the Orange County Sheriff’s Office contacted him.

“Allen Bridges and I started working together to get it cleaned up,” Kitchen said. “We were going to move it to Veterans Memorial Park. He was about the second or third person that called me and asked to not move it. It is the only one in Bridge City.”

The auxiliary from VFW Post 2775 placed the statues at the location several years ago.

“They took care of it, but after several years, it kind of waivered and things didn’t get taken care of,” Kitchen said. “Things were in a bit of disrepair. The flagpoles got bent.”

Kitchen and Bridges pulled together resources to beautify the area.

“He pulled together his resources to get the statues painted and have the cover put over it,” Kitchen said. “We are going to paint the deck and put walkways to the flagpoles for when we have ceremonies. We will have a wreath-laying area, too.”

The group is also working on adding flowerbeds to the location.

“Hopefully, we will have most of it done by Veterans Day,” Kitchen said. “The walkways may not be done by then, but that is the progressive vision. We are going to have some lighting installed to illuminate it at night and the flagpoles.”

Melinda Bean, who is a local artist, volunteered to paint the statues.

“We are making them as historically accurate as possible,” Kitchen said. “We had a Marine tell us some things that were wrong, but it is not going to be perfect. There are some things we can’t fix. The EGAs on the collar are one of them. The left one is facing the wrong direction. It is concrete. We can’t do anything. There is an EGA that is not on the belt buckle that we are going to fix. We will do that once everything is done.”

Kitchen said the ultimate goal is to honor Veterans by keeping the memorials alive.

“Every day is Veterans Day for us,” he said. “We can’t do enough for them. We are constantly working on stuff.”