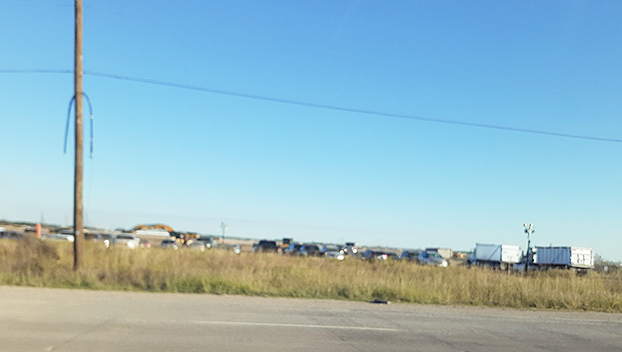 Chevron-Phillips’ current work in Orange County is still classified as a “land-improvement project,” with no official announcement. (Stephen Hemelt/The News)

ORANGE —Orange County’s judge is optimistic even though Chevron-Phillips Chemical has not officially announced where a multibillion-dollar expansion is to take place.

Chevron-Phillips’ current work in Orange County is still classified as a “land-improvement project,” with no official announcement of an expansion in Orange.

“We have been pretty much anticipating some announcement of some type coming by the end of the year, but we haven’t seen it,” County Judge John Gothia said. “They haven’t let us know of anything yet.”

While an official release has not been put out, some signs could tip C-P Chemical’s hand. The company bought more than 2,000 acres of land between the Orange facility and Texas 87 in 2019 after announcing Orange as a finalist for a proposed $8 billion expansion.

The county has already seen the ripple effects from the anticipated expansion and other projects on Chemical Row.

“I know that several other plants are doing turnarounds right now and improvements to their facilities, which is great,” Gothia said. “It is great to see them invest in the local plant. That means they aren’t going anywhere.”

C-P Chem is not the only company with growth on the way. An Entergy plant is currently awaiting permits from the Public Utilities Commission to move forward with a project in Bridge City.

“There is a lot of movement for small commercial and residential right now,” Gothia said. “That is the biggest movement. I lived here the majority of my life, and I have never seen what we are seeing right now in Orange County. I have seen it happen all around us. Other counties were growing their facilities and we weren’t. Now we are. We are extremely happy to have these companies looking to build here.”

Cities within the county are already seeing the benefits of the potential expansion. Officials in Bridge City predict 200-300 homes being built within the city limits over the next three years due, in large part, to the ongoing plant projects and anticipated expansions.

Chevron-Phillips did not immediately respond to a request for comment on the potential expansion or a timeline for the Land Development Project.