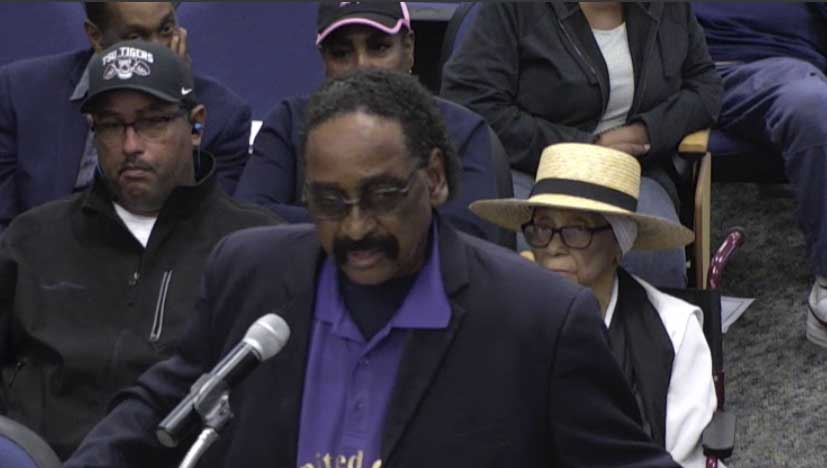 The first of two public hearings regarding the abandonment of a portion of a public Port Arthur street to Motiva Enterprises drew as much opposition as it did support during Tuesday night’s council meeting.

Motiva has requested taking ownership of a 4.878 acres portion of a public right-of-way on 25th Street.

Pamela Langford, assistant city manager, said the portion of right-of-way in question is located between Florida Avenue and Savanna Avenue, also known as Spur 215, and locally referred to as the reservoir road.

This is was not Motiva’s first time to request the land.

Langford said in November 2019, the planning staff received an application from Motiva requesting the aforementioned abandonment. As part of the process, the application was accompanied by signed and written consent of all utility entities and adjacent property owners, with Motiva LLC being the registered property owner of the adjoining properties.

“An appraisal report was requested, and an analysis was conducted on Dec. 11, 2019,” she said. “Based on the fair and reasonable consideration, the fair market value of the portion of public right-of way was appraised at $127,500.”

The Planning and Zoning Commission met in March 2020 for a public hearing.

“However, the discussion with council in executive session yielded a decision to request that Motiva Enterprises LLC withdraw its request for abandonment due to traffic and safety concerns posed by the council,” Langford said.

Motiva submitted a new application for the same abandonment on Sept. 9, 2022, which was discussed at a Sept. 19 Planning and Zoning Commission hearing.

There was no written or verbal opposition, and the commission voted 3-0 in approval.

An updated appraisal was conducted in October 2022. Fair market value appraised slightly above at $131,000.

City Engineer John Cannatella spoke on the city’s cost of repairing the road if Motiva did not take ownership.

“I’m up here not to advocate but to just give you some facts about the street right now,” he said. “There are several issues along 25th Street that I’m sure a lot of you are aware of. We have a drainage problem; when we get 4-6 inches of rain, the street floods right there at the Savannah intersection. And this is not just heavy rain events but normal rain events.”

He also mentioned two bridges deemed insufficient by the Texas Department of Transportation.

“We need to put some money into that bridge to bring its structural integrity up to code,” Cannatella said. “As far as I know  — none of this is planned for or budgeted for in this year’s budget — but I did want to mention in my estimate it would be around $4 million to $6 million to bring this road up to what we’d call normal city standards.”

“We have evaluated the potential abandonment and in summary have found that there will be minimal impact or influence on the abandonment on public safety/emergency response,” he said.

After, several residents came forward in favor and opposition.

“When I heard about this, it concerns me and a lot of citizens are concerned about this,” said Willie “Bae” Lewis. “When you go to close off access and all evacuation, that’s a whole ‘nother ball game. Before you all decide as a council…you need to call a referendum and ask the voters what they want to do.”

Lewis compared the cost of fixing the street to that of abandoning it.

“Because if you do it, the citizens can get 1,400 signatures and put this ordinance on hold. It’s up to you all to make the right decision. It’s an enhancement for Motiva, yes, and that’s fine and dandy. But it’s an unsafe thing to do for the safety and access to the citizens of Port Arthur.”

“This is an important decision, from my perspective, and I wanted to share my thoughts and recommendations for you to consider as you prepare,” he read. “Regarding the resolution to abandon the section of public road — 25th Street and Terminal Road — to be acquired by Motiva, I am writing to you all in support of the request before you. This is clear — it will make both the public and Motiva a safer place while eliminating a significant repair liability for the city.”