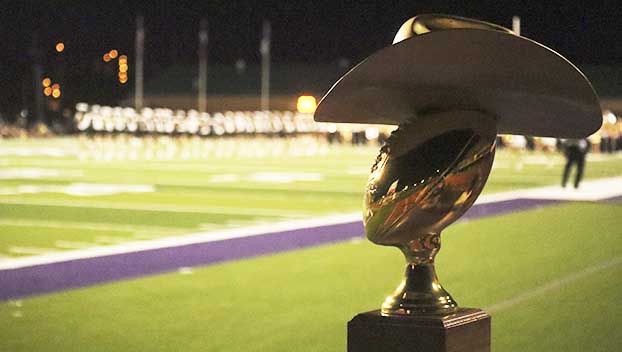 Sorry but no talk about holes in one or Port Neches-Groves PGA Tour players Chris Stroud and Andrew Landry in this space devoted to all things golf each week.

Nederland and Port Neches-Groves tangle for the 99th time Friday night and, as it has for the past eight years, that amazing trophy so many of you have taken photos with will sweeten the taste of victory for the winner.

Mostly, it’s the trophy and the man who inspired it that I’m here to discuss.

Roughly 48 hours after Bum passed away at age 90 in the third quarter of the 90th Nederland-PNG game in 2013, the idea of a trophy tying him to the game and lobbying for it to be called the Bum Phillips Bowl was pitched to me by a former PA News sportswriter named John DeVillier.

Before getting into how that stroke of genius reached John, allow me to define the trophy’s comparative magnitude from a couple of guys who have long been exposed to big-time pieces of sporting hardware.

We’ll start with Jim Nantz of CBS, my good friend from our days of doing a sports talk show together in 1980 at KTRH in Houston.

“This might be the best-looking trophy I’ve seen in sport,” e-mailed the man who calls Super Bowls, NCAA basketball championships and the Masters golf tournament, among other major events. “It captures Bum to perfection. It’s bigger than life. Texan all the way. Dedicated to his home community. This is truly a treasure.”

Then there’s Bum’s son Wade, who presented the trophy in 2014 and will be part of that ceremony, along with PA News publisher Stephen Hemelt, Friday night.

“I have been part of winning and held the Lombardi Trophy, but I was elated to see such a huge, beautiful and unique trophy dedicated to my dad,” said the coordinator of Denver’s Super Bowl 50 winning defense in 2015. “Our family is so proud that the Bum Phillips Trophy carries on his name and means so much to Nederland, Port Neches-Groves and all of Mid County football.”

On the off-chance that someone reading this doesn’t know the Phillips connection to Mid County Madness, Bum built Nederland into a power in the early 1950s, then coached PNG in 1963 and 1964.

Wade was a quarterback and linebacker for an Indians team that split the two games.

As was mentioned, Wade, the new coach of the Houston team in the XFL, will be part of the trophy presentation Friday night. His presence is linked to the documentary – “Coach Phillips: Three Generations of Football Tradition” – being produced by Mark Burns of Houston.

Release of the documentary is expected sometime in 2023, probably near Bum’s 100th birthday on Sept 29. That date should also be close to the 100th playing of Mid County Madness, a term it should be noted was coined by Tom Halliburton of The Port Arthur News.

The three generations, of course, are Bum, Wade and Wade’s son Wes, the offensive coordinator of the Minnesota Vikings who is on track to be the third NFL head coach in the Phillips family. Burns’ crew has already been to Southeast Texas but couldn’t pass making the Bum Phillips Bowl and trophy presentation part of the documentary.

It’s just the latest example of how the trophy has or will widen and enhance the exposure of a back-yard rivalry that Dave Campbell’s Texas Football Magazine deemed No. 1 in the state in 2017. Nantz got the high-profile exposure started by having a photo of the trophy shown on a CBS NFL telecast in 2014.

Now back to that stroke of genius John DeVillier passed along in 2013.

Dawn Fournier-Frederick, a 36-year employee of Neches Federal Credit Union, knew DeVillier well because he was on its board. She met Bum when he was in Mid County for the naming of streets in Nederland and Port Neches as Bum Phillips Way. She also heard part of the pep talk he gave to each team leading into that year’s game.

Fournier-Frederick was literally blown away. When her and fiancée Brian were driving home from dinner on a Friday night, they heard on the game broadcast that Bum had passed away.

Their response a day later was, “Wow, wouldn’t it be amazing if the Mid County Madness game was named after Phillips as a bowl game and a trophy with a hat on top was awarded to the winner each year.” They figured it was a long shot but called DeVillier.

Take a bow, Dawn and Brian. There might not be a trophy without your vision. But once DeVillier came to me about the idea, there was no way it wasn’t going to happen.

My initial thought was that this couldn’t just be a trophy, it had to be over-the-top special. Bum is one of my all-time favorite people and perhaps the most unique individual I’ve ever met.

Making that happen involved the late Joe van der Weg of Jiffy Trophies in Nederland, Jack Ellis of Claytex Trophies in Henrietta, a Wichita Falls hatmaker, Bum’s wife Debbie and a PA News publisher named Rich Mackey who didn’t blink when I told him the trophy, with Bum’s hat mounted on a signed gold football, would cost us $3,500.

Ellis was the key. Van der Weg told me crafting the trophy was beyond his means and suggested Ellis. Once I learned of some of his trophy credits – First Lady Laura Bush, the NFL, NBA and MLB, and a couple of major motion pictures, I knew we had our guy.

The trophy was, in football terminology, “a real team effort.” It took six months from conception to delivery, with Van der Weg’s etching of a Phillips sideline photo in Pittsburgh the final piece. And, thanks to a new PA News publisher – Hemelt – who came to realize what the trophy meant to so many, it has become more and more iconic.

Hemelt, who is not from this area, at first didn’t understand why the trophy was such a big deal. Once he did, he’s gone all out to circulate it in the community, providing fans of both schools an up-close and personal photo experience with what Nantz appropriately labeled a “treasure.”

“When I was first told about it and saw the trophy, I failed to see its impact,” Hemelt admits. “Then I got into the community, my son started playing sports in Nederland and the impact became unreal to me.

“People associate the trophy (which is young) with the decades-long history of the game. It’s the tangible touchstone of the rivalry. I’ve never seen anything like it before. We love being a part of it.”

For the record, the base of the trophy has 36 plates for the year-to-year scores to be inscribed. That takes it to 2050. I won’t be here, but I sure hope moms and dads and grandparents save this column so that kids playing in the 127th renewal of Mid County Madness are informed about the “Coach, Cowboy, Christian,” who made it possible.

Bob West proudly served as sports editor of The Port Arthur News for 43 years. He can be reached at rdwest@usa.net.