Port Arthur educator with skeletal abnormality sets no limits for success, inspires many others 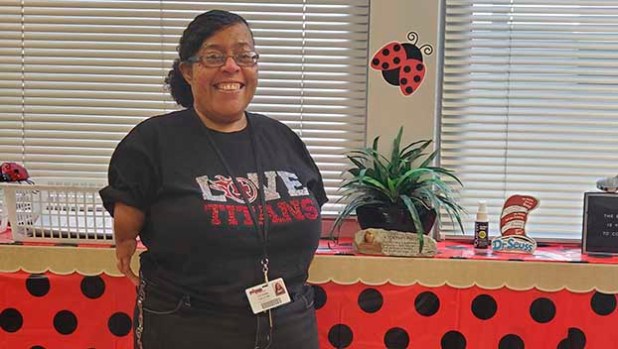 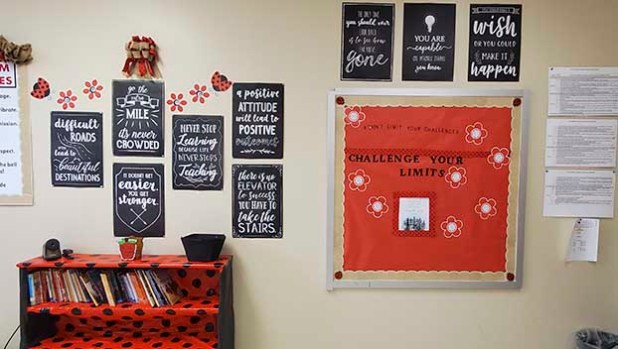 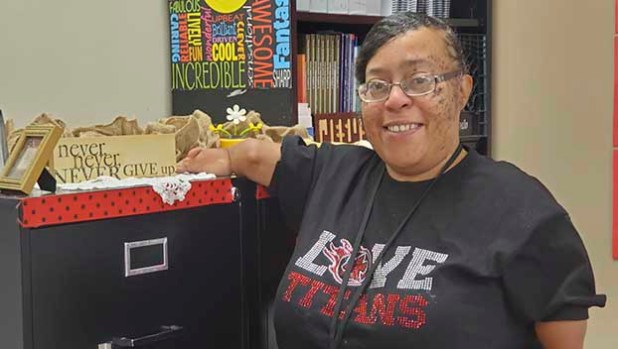 A motivational sign in Patrina Gallow’s classroom is used to inspire others. (Mary Meaux/The News) 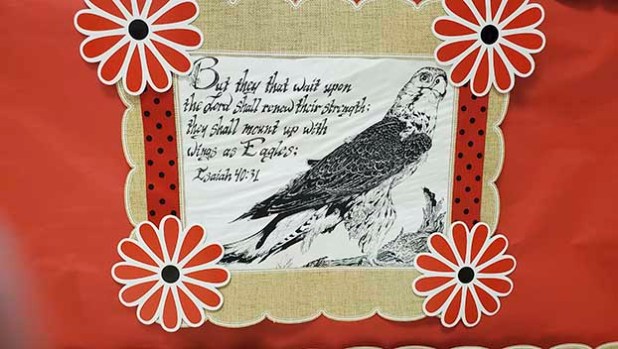 A Bible verse taken from Isaiah holds a special spot at her desk. (Mary Meaux/The News)

Patrina Gallow may have been given some lemons in life but she chooses what flavor of lemonade she wants to make with them.

“I took these lemons,” she said regarding her arms. “I don’t call these deformities. I say these are lemons. God gives you lemons sometimes, but you still have to live with it. I take those lemons and make lemonade with it.”

Gallow speaks with an ever-present smile and an air of positivity. The Lincoln Middle School instructor is working with dyslexic students and has worked with students and adults who have a wide variety of disabilities.

Gallow was born with Holt-Oram Syndrome, which left her with a skeletal abnormality of both arms, but that doesn’t keep her from driving or doing most activities. She lives an independent life.

That much was apparent when, while in prekindergarten, she picked up a pencil and taught herself to write, just as her fellow students were doing. Her teacher, she said, wasn’t too sure what to do with her, so she sat her in the corner.

Her mom was told to always treat her as she did her sibling, Cynthia Garcia, who is 11 months her senior.

“I always felt I was born different to make a difference,” she said.

Her fellow students were always nice, and the only provisions she had in school was in physical education class. It was her arms, not her brain, that was impacted by the syndrome.

Gallow attended what was then called Lamar University Port Arthur, where she held her first job as a student assistant. She graduated with an associate’s degree in criminal justice, which led her to the education field, she said.

Gallow began work as a substitute in the Port Arthur Independent School District and worked with RISE Center in Beaumont as a specialist to help people with disabilities.

By 2004 she earned her bachelor’s degree in general studies.

While continuing her education, she was asked an odd question.

“One of my counselors said, ‘why do you want anything other than a bachelors? You’ve already done good, so why would you want anything more?’ And I was like, I’ve never been that person to sit home, just draw a check and just settle for less,” she said.

Gallow started mentoring in 2011, encouraging students and “being a light for them,” she said. She worked with IEA (Inspire, Encourage and Achieve). Not only did she work with PAISD, she also works in the evenings at the Minnie Rogers Juvenile Detention Center mentoring the kids.

By 2014 she earned her master’s degree in counseling.

No matter whom she works with she tries to instill in them a spark and encouragement.

“I let them know that they too can get jobs no matter the situation. I try to lead them by example and let them know that we have no excuses,” she said. “We don’t have to accept the ‘no’s’ that people tell us. We can say, ‘yes,’ because it’s all about what we want for us because this is our life. That’s why I easily could have been one of these people, and people would have understood if I sat at home and had a bunch of babies but I have no children. Church is my life. God is my first and foremost everything.”

Cynthia Garcia, the principal’s secretary at LMS and Gallow’s sister, said Gallow doesn’t meet any challenge. She exceeds and excels.

“Everywhere we go she’s a celebrity. She’s known by not only the children — the children come and greet her and hug her,” Garcia said. “No matter where we go, they remember her. They always talk about how she helped them and that’s not just with the children, that’s with the adults, as well.”

Gallow motioned toward a large sign in the classroom, which has a theme for this school year that is also a theme for her and the students as well. It reads, “Don’t limit your challenges. Challenge your limits.”

“She’s a legend,” Garcia said. “When she leaves this world, she can say she left a mark on this world.”