Doctors found 8 malignant masses in Port Arthur breast cancer survivor; she has advice for other women 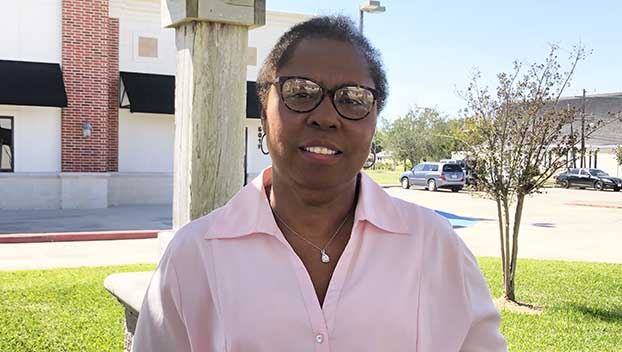 Diane Brown, who worked for the Port Arthur Independent School District for 27 years and served on the Board of Trustees for nine years, was diagnosed with breast cancer in 2020. (Monique Batson/The News)

In 2018, when Diane Brown’s doctor found a mass in her right breast, she was told it was something they’d watch but nothing they were concerned about. And the next year, she heard the same words.

So it was extra shocking in 2020 when she was told she had 10 masses across her chest, eight of which were malignant.

“That threw me for a loop. I didn’t know what to do,” she said. “At that time you couldn’t bring anyone with you into the hospital. I was alone; my husband was at a hotel.”

When Brown learned the life-changing news, her husband was on a speakerphone lying next to her on a hospital bed while he waited at a nearby hotel. Her doctors in Southeast Texas requested to do a biopsy, but she opted to have it done at M.D. Anderson Hospital in Houston.

Not only had she been diagnosed at 66, following decades of annual mammograms, but it happened during the height of the COVID pandemic.

“It was a nightmare,” she recalled. “And I didn’t know. I did what they said, self-exams in the shower. And my doctors here didn’t feel any lumps. So I was just going on with my days like nothing was wrong.” 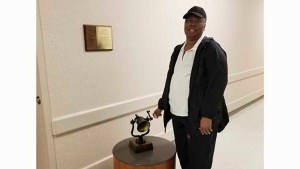 On Nov. 18, 2021, Diane Brown rang the bell at M.D. Anderson Hospital in Houston to signify she had completed six weeks of radiation. (Courtesy photo)

While originally from Opelousas, Louisiana, Brown says Port Arthur is more like home than her hometown. She and her family arrived in 1975 after her husband completed his service in the U.S. Army.

“All of his siblings had moved to Port Arthur for jobs with the refineries and the shipyard, so that’s what got us down here,” she said.

And with two young sons, she eventually took a job as an office aide at their elementary school and worked up to the supervisor of the Shipping and Receiving Department before retiring after 27 years. And beginning in 2012, she ran for a spot on the PAISD Board of Trustees, where she served for nine years.

And towards the end of her term, she would sit in the boardroom and serve the residents of Port Arthur with no knowledge that her upper body was filled with cancer.

“My mother didn’t have breast cancer,” she said. “None of my sisters had breast cancer. And I thought, ‘why me?’ But it’s not for me to ask that question because God gets the last word.”

After receiving the news in November 2020, she left M.D. Anderson for the hotel where her husband and family were waiting.

“I was so upset,” she said. “My husband said, ‘What are we going to do?’ And I just said, ‘I don’t want to talk about it right now.’ I was all in my head. I left and walked out of the room and cried in peace. I must’ve cried for two or three hours that night.”

In January, as she was preparing for a board meeting that night, she got a call asking the biggest question.

“They said, ‘It’s really cancer, so it’s your decision on what you want to do. It’s all across your chest,’” Brown said. “I said, ‘Y’all are the doctors. Do what you have to do.’ I said, ‘Just cut them off.’ I made a joke about it. I said, ‘I came in the world without them; I can go out of this world without them.’”

From January to July of 2021 she went through chemotherapy. But having been warned the pain medication could lead to addiction, she went through treatment without taking any of her unnecessary prescriptions.

In August, she had a double mastectomy. And in October, she began six weeks of radiation.

But she had already returned to her seat on the PAISD board by then.

“I talked to God. I talked to my priest,” Brown said. “And when you have a support team, it helps.”

An integral part of that team, she said, was PAISD Communications Specialist Adrienne Lott, a two-time breast cancer survivor.

Their families were friends, and the two worked together in the school district.

“For her to say I am a huge part of her support system, I am both humbled and honored,” Lott said. “I am willing to share both of my journeys with cancer with anyone who may benefit from me listening. God allowed me to survive this long as encouragement for people just like Mrs. Brown and her family.”

Lott said she couldn’t have survived mentally, physically or emotionally without her support system.

“If I can be that support for someone else, I wholeheartedly will,” she said.

Now in remission, Brown has returned to a normal lifestyle. But she has advice for anyone who, like her, is told they have a mass that isn’t of concern.

“I tell everyone, if they come to you with that, make sure you get a second opinion,” she said.