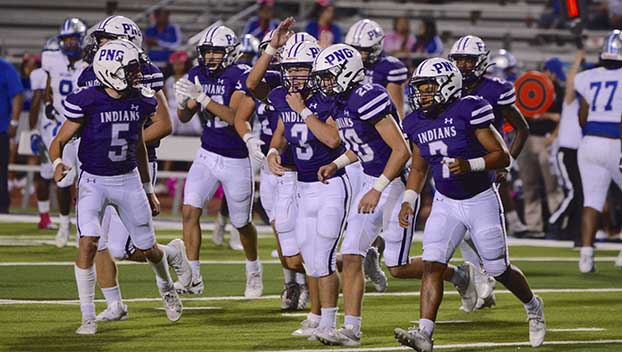 PORT NECHES — With Mid County Madness a week away, the Port Neches-Groves Indians are focused on holding on to their first-round home playoff spot in the district.

PNG (5-2, 3-1 in District 9-5A Division II) currently holds the second seed in the district behind Fort Bend Marshall. If they can win out, they host a first round game at Indian Stadium next month.

“We finish the year with three really good teams,” defensive coordinator Matt McDaniel said. “We have a lot of work to do and a lot of improving to do in practice. The kids are still working hard.”

“They are much improved,” McDaniel said. “They are a good football team. Their kids play really hard and are physical. They are really good at what they do offensively. They do what they do effectively and run a physical style of offense.” 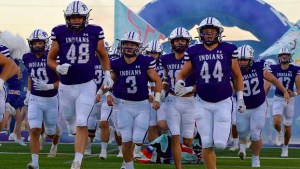 The Indians wrap up their season against teams holding the last two positions in the district in Nederland and Galena Park.

With Nederland next on the schedule, McDaniel said he trusts his players aren’t looking ahead.

“They have been really good all year at taking everything one step at a time,” he said. “Every day is a new set of challenges, and they come with a mindset of getting better. They have done that all year and continue to do that. I think they know Santa Fe is a good football team.”

Santa Fe running back Jackson Stroud is fourth in the district in rushing yards with 282 on 53 carries. He has also reached the end zone five times on the ground.

The PNG defense might have some opportunities to get their hands on the ball, as Santa Fe’s quarterback has thrown the second most interceptions on the season.

PNG enters the week with the fourth-ranked offense in the district. Quarterback Cole Crippen is fourth in passing yards with 1,119 and nine touchdowns. His main target, Chance Prosperie, leads the district in receptions with 32 and is second in yards with 445. He has four touchdowns.

PNG receiver Shea Adams is third with 24 catches for 350 yards and three scores.

On the defensive side of the ball, safety Torryan Hinton leads the district with three interceptions. He is one of six PNG defenders to record a pick on the season.

The Indians are coming off a close win against Dayton last week. After blowing a 10-point lead, PNG marched down the field to seal the win with a touchdown in the game’s final seconds.

McDaniel wishes the victory was a little more convincing, but said he liked how the team responded to adversity.

PNG is 2-0 in games decided by one score.

“It was very impressive,” he said. “We fought, and the offense responded after we gave up that touchdown towards the end. I was a little disappointed in the way we finished on defense. I think our kids were, as well. Great teams help each other out and play complimentary football. We struggled at the end and the offense helped us out.”