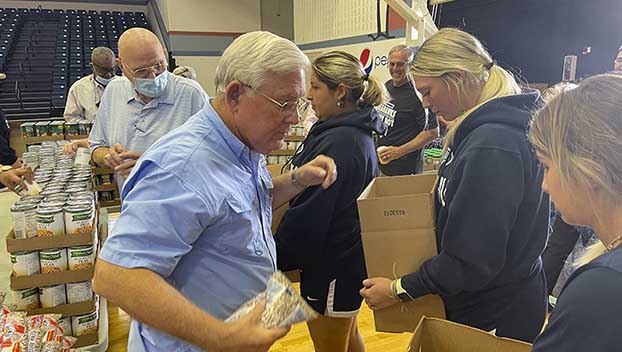 Last November, members of the Rotary Club of Port Arthur formed a line inside the gym at the Carl A. Parker Multipurpose Center as students from Lamar State College Port Arthur and Bob Hope High School helped fill 125 boxes with Thanksgiving dinners for local families that, otherwise, would go without.

Each one had rice, macaroni and cheese, green beans, cranberry sauce and other traditional Thanksgiving meal items, which would be delivered with a ham.

But it’s shocking what can happen in just one year.

As the current president of the Rotary Club of Port Arthur, on Tuesday the Thanksgiving Project Committee met to learn we were facing new obstacles.

The Southeast Texas Food Bank didn’t have the resources for us to purchase the usual items, which is done for much cheaper than if we were to go to a grocery store.

And without that discount, our budget would allow for only 50 Thanksgiving meals.

Our goal was to increase what we had done previously, but inflation in a county with a high number facing food insecurity had more than halved it.

So it was time to think outside the box — or, rather, in it.

We decided to set donation boxes out at certain places in hopes of collecting what we couldn’t buy. We talked about getting local schools involved to collect canned goods and non-perishable food items. And before any of that, we agreed to set aside a coffer at each meeting and ask our own members to show support however they could.

Knowing it might be the only decent meal they have in a while, leaving 75 families without it simply isn’t an option.

And to take an extra step, we made sure to submit an application to the Season of Giving grants powered by Port Arthur LNG.

(And before you finish that thought, let me reassure you I have nothing to do with the grant selection process this year. Last year I was a committee member that helped select the recipients, but recused myself when the Rotary came up.)

From being a committee member and a non-profit that received funds, I can give you insight on how these grants help local nonprofits — particularly during difficult times. Because if we’re having a difficult time, those we serve are suffering twice as much.

That’s the Rotary motto: Service above self.

Last year during the inaugural Season of Giving grants, the panel awarded grant money to the Rotary Club of Port Arthur. And it’s through these grants, the annual Taste of Gumbo and other fundraisers that we were able to give 125 families Thanksgiving dinner and award $16,500 in scholarships to Port Arthur-area seniors in the last calendar year.

It was also how the Willie Carter Outreach Center was able to help provide 1,500 backpacks filled with school supplies to local students. And it was how Samaritan Counseling Centers of Southeast Texas was able to purchase needed technology to allow for digital counseling during a pandemic, ensuring no one went without necessary care.

In fact, 13 Port Arthur-based non-profits received part of a collective $25,000 in grant money through last year’s Season of Giving grants.

If you are a Port Arthur non-profit with a valid EIN, please visit www.PANews.com and click the Season of Giving tab on the top right corner of the page to apply by the Oct. 24 deadline.

And to everyone else, The Port Arthur News will be accepting canned and non-perishable food items to help the Rotary Club of Port Arthur meet their goal. Donations can be dropped off at 2439 Memorial Boulevard. All donations are greatly appreciated.