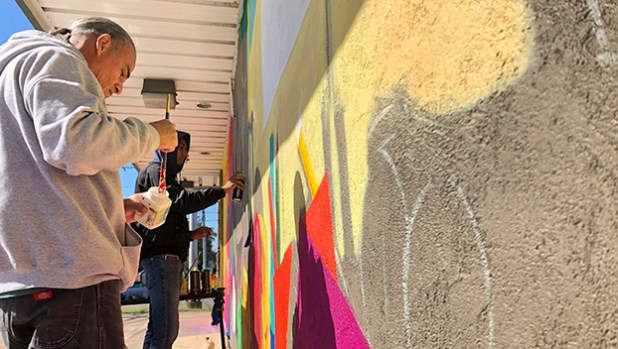 Local artist Juan Esparza, front, and his accomplice Elias Cabrera work on a mural on the side of Missions Attic in Groves. (Monique Batson/The News) 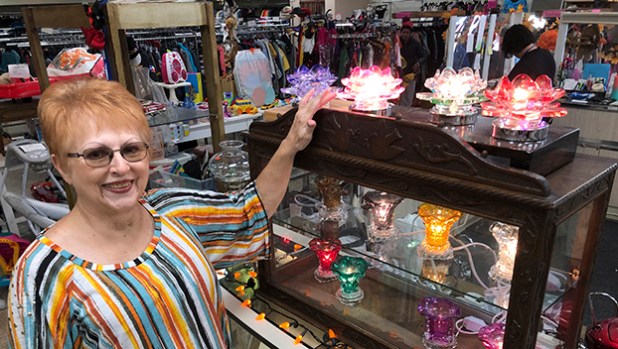 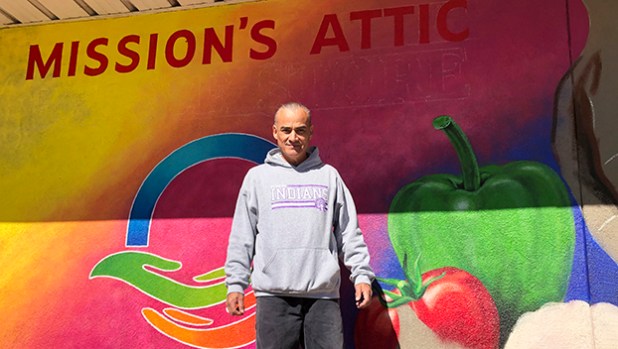 Juan Esparza said the mural on the side of Missions Attic was designed to showcase a multitude of services offered through the United Board of Missions. (Monique Batson/The News) 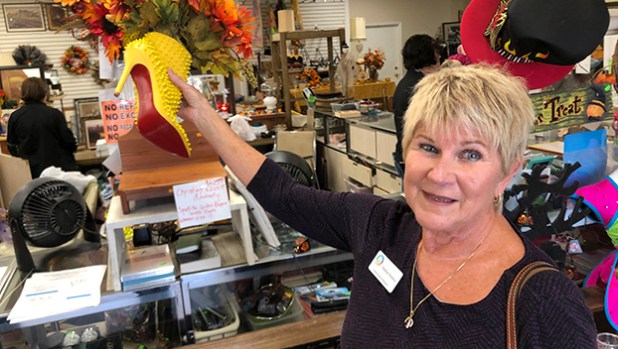 Debbie Perkins, executive director of the United Board of Missions, holds a pair of Christian Louboutin boots for sale at Missions Attic. (Monique Batson/The News) 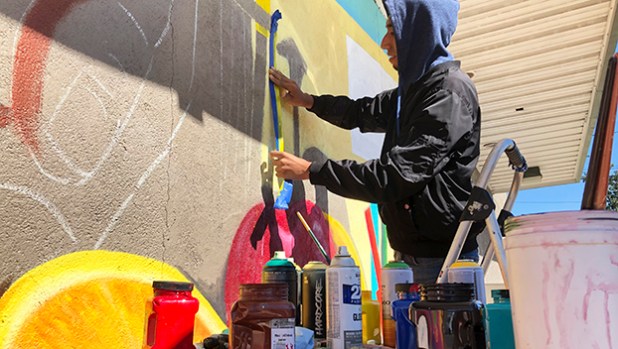 Elias Cabrera, seen painting at Missions Attic, was one of the artists responsible for the new UGK mural in Port Arthur. (Monique Batson/The News)

GROVES — The building that sits at a popular corner between two towns was easy to overlook. But as color begins to fill the side of the resale store at the corner of Twin City Highway and 32nd Street, it’s now impossible to miss.

“(The theme) is the Missions Attic helps people,” said local artist Juan Esparza, who was commissioned to create the mural for the building, as he pointed to various elements of the design. “We have the food bank. And we’ve got the kid studying for his future with school supplies and stuff like that.”

All of the above are just some of the services offered through the United Board of Missions. But a large amount of that is funded by resale store Missions Attic, where one can find everything including the kitchen sink.

“We did just sell a copper sink about a month ago,” said Lynn Riley, who manages the store. “It was on a wooden cabinet and had all the plumbing and everything connected to it.”

The store is part of a “circle of love,” said Debbie Perkins, executive director of the United Board of Missions.

“We take in donations from the public, and if it’s sellable, we put it in the store to resell,” Perkins said. “We also offer people that are in need to come here through the United Board of Missions for clothing and they can come every six months. The proceeds that come from selling the items here goes back to the United Board of Missions to help fund our needs for the community.”

“People bring what they don’t need, we use it one way or another, and then we put it right back out into the community,” Perkins said. “This helps us sustain everything that we do.”

Programs offered by the United Board of Missions include help with clothing, rent, utilities, a food pantry, a back-to-school program, a toy drive, a partnership with Gulf Coast Health Center for prescription assistance and Meals on Wheels. And as more people shop at the resale store, more services become available.

“We have clothes. Right now we have Halloween costumes,” Riley said. “We have prom dresses. We have wedding dresses. We have party dresses. As you can see we have any kind of knick-knacks that you would want from big to little. We have anything you’re going to need in the kitchen. You never know what we’re going to have.”

Other items include furniture, books, jewelry, designer purses, designer shoes, oil lamps and medical equipment, such as wheelchairs and walkers.

“We will have decorated trees for sale,” Riley said. “We wrap them in sheets and you carry them out the door.”

The store manager said a few years ago a newly divorced father of three realized he needed a tree for his place, and brought his children to pick one out.

“He definitely got dad points for that,” Perkins said with a smile.

Missions Attic partners with the Texas Workforce Commission to have on hand four part-time employees, and also operates with volunteers.

Those wanting to donate can do so by dropping off items at 3300 Twin City Highway, Monday through Saturday from 10 a.m. to 5 p.m. Officials ask that donations not be dropped off when the Attic is closed, as they are often stolen before they can be received.

In addition, the center is in need of volunteers for the Meals on Wheels program. Those interested can call 409-748-9948 or email mow@unitedmissions.org.