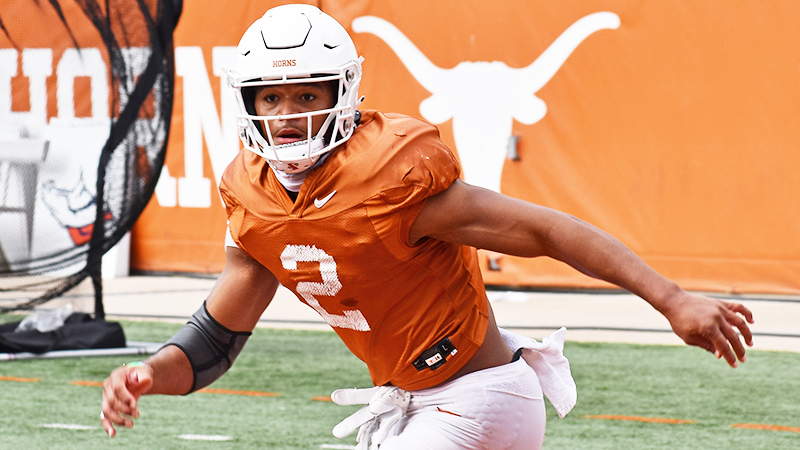 Port Neches-Groves graduate Roschon Johnson has carved quite the path for himself with the Texas Longhorns. Recognized as one of the teams’ leaders, Johnson joined Big 12 radio this week to talk about his upbringing and his team’s recent hot streak ahead of Saturday’s contest against Oklahoma State.

Johnson said getting his degree was his top priority for going to college.

“It is a major deal,” he said. “My parents made sure that they instilled that in me; the will to not only be good on the field but off the field. I remember being a little kid and bringing my report cards home. If it was not all As, my mom would get mad at me. But I don’t think I had a B until the 12th grade. It has always been a point of emphasis for me to get my education …

“Coming into college, that was the first thing I wanted to get.”

Texas Head Coach Steve Sarkisian recently said he had a “come to Jesus” meeting with the players in an attempt to get the team on the right track for the backstretch for the schedule.

“We knew just from looking at the film that there were a lot of errors and self-inflicted wounds to put ourselves in that position,” Johnson said. “Going forward, I think we can learn from that to take a look at the details and execute as a whole.”

The radio show host asked Johnson about how this year’s team is different from the squads over the past few years.

“I think it feels different to the extent that we know we can win and are more than capable of winning every game we play,” Johnson said. “If we hunker down and execute and do the things we set out to do, we can win every game.”

Johnson said he and running back Bijan Robinson have a good relationship and have built a strong bond.

“We have gotten closer and closer each year that we have been around each other. That is another brother to me. We joke around. We are very similar in many ways… We have learned from each other and helped each other along the way.”

The two combined 206 yards against Iowa State Friday, providing a strong one-two punch to help get the Longhorns’ last score.

“That was one to hang our hats on and be proud of to be able to run the ball when your opponent knows it,” Johnson said. “That was a good thing for us to do and a confidence booster for our offensive unit. That puts us in a great position going forward.”

Johnson also talked about the relationship he has with running back coach Tashard Choice, who played at Georgia Tech and for the Dallas Cowboys.

“Coach Choice has meant a lot to me on and off the field,” Johnson said. “He has brought a different perspective to our running back room, from a professional standpoint. He knows the ins and outs of playing college football and professionally. He is a younger guy that can relate to you a little better. He has been a blessing.”

The Longhorns are heading into a rigorous part of their schedule with their next three games against ranked opponents.

“I am very excited to showcase who we are as a team and showcase we are more than capable of being in Cowboys Stadium on Dec. 23,” Johnson said. “It starts with our game against Oklahoma State in Stillwater. We just have to take it day by day and we will be in good hands.”

Johnson also spoke glowingly about Longhorns quarterback Quinn Ewers and the impact he has on the offense.

“I think he was made for these types of moments,” Johnson said. “He doesn’t let things affect him. He doesn’t really get too high or too low. I think it helps calm the team down, and everyone already knows the type of arm talent he has. With him back there, we know we will get the best out of him. Ultimately, I think he instills a lot of confidence in us as an offensive unit.”