Memorial has sights set no further than Baytown Lee 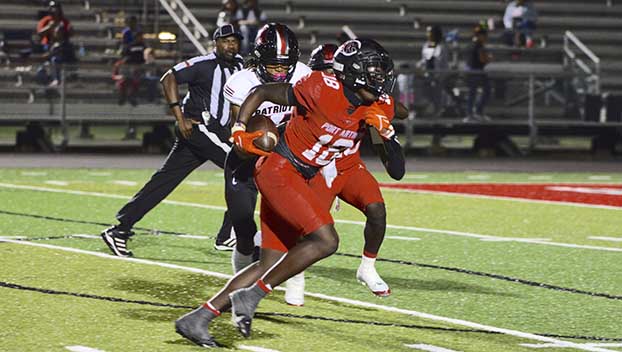 With three games left in the season, the Memorial Titans remain undefeated with a pristine 7-0 record (5-0 in District 8-5A Division I) and ranked No. 5 in the state.

Memorial could be setting up for a winner-take-all finale against Kingwood Park in the last game of the regular season, as both teams are the only ones with perfect district records remaining.

But the Titans are not trying to look ahead, evident by the 63-13 win over Goose Creek Memorial last week.

“It is not something we have talked about,” Memorial Head Coach Brian Morgan said of his team’s outlook on the rest of the season. “Personally, I can’t even tell you what is coming up ahead. We are trying to beat Baytown Lee.”

Baytown Lee enters the week in the middle of the pack with offensive and defensive rankings. The Titans hold the top spot in both categories.

“Their offensive skill guys are probably going to be the best we have seen all year,” Morgan said. “The quarterback and receiver are good. Their running back can really run. They play some guys both ways. Hopefully we can take advantage of that with conditioning and playing four quarters. They are going to be really talented as a skill group.”

Memorial receiver Ja’Quan Holmes and tight end Najiya Green put on a show against Goose Creek as teams are starting to roll more coverages over to the Titans’ top target, Caleb Goodie. Holmes finished the game with six catches for 157 yards and three touchdowns. Green hauled in three catches for 87 yards and two scores.

“Last year, we were watching Holmes play on JV and knew he was really talented and would be a really good player,” Morgan said. “A lot of who gets the ball is just based on coverages. We have some stuff to get each guy the ball.”

The Titans defense is young in the front seven with two sophomores on the defensive line and a freshman at linebacker. The coach said the unit has taken a little time to come along, but said the team is not mortgaging the present to pay for the future.

“Those guys are playing because they can help us right now,” he said. “Them playing right now will mean they will be really good for the next few years to come, but they are on the field now because they can play and help us win games.”

Morgan said he had never had a freshman on varsity until this year and has three playing, with two logging significant snaps.

Amante Martin provides a change of pace at running back, and Tai’yion “Tank” King is the starting linebacker.

As far as the playoff picture goes, the Titans could clinch a first round home game with a win this week and next.