Check out local effort to save, rehabilitate and train dog to benefit disabled veteran 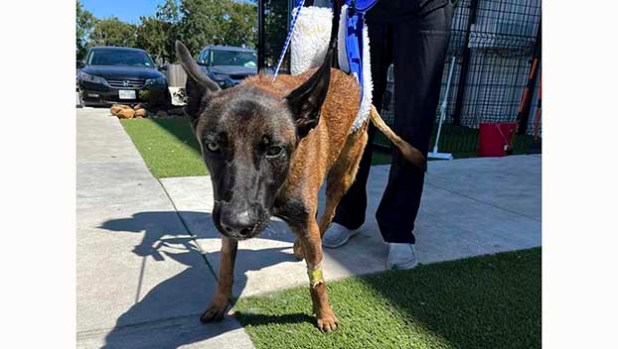 A Belgian Malinois, shown recovering after being hit by a car, will be trained and given to a disabled veteran. (Courtesy photo) 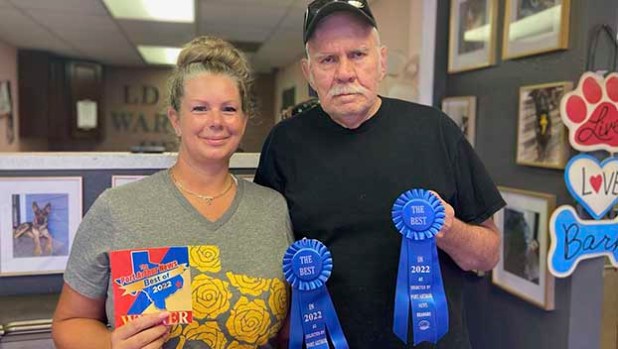 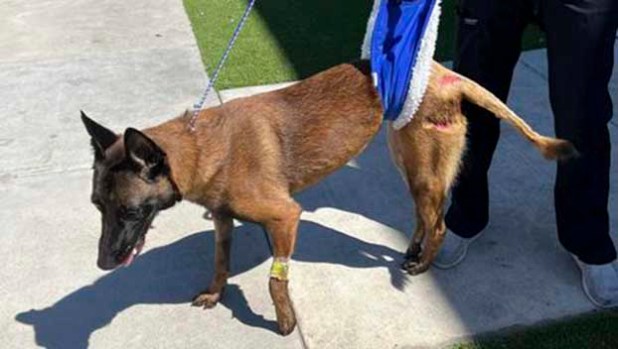 The dog will be trained as an emotional support dog. (Courtesy photo) 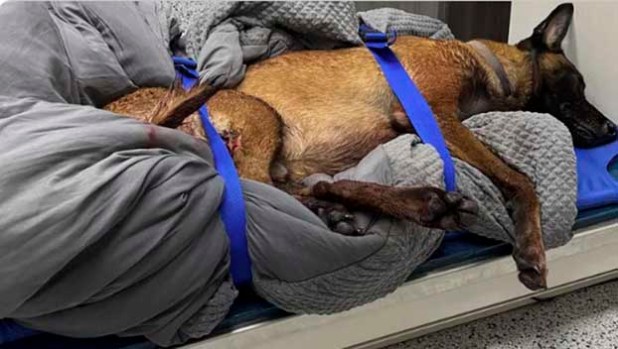 The dog is being treated at Neighborhood Veterinary Centers. (Courtesy photo)

NEDERLAND — An injured dog that was on a list to be euthanized until a month ago has a new chance at life and a new purpose upon recovery.

This new path in life will lead the dog to special training and a new owner who is a disabled veteran.

Pet groomer/dog rescuer Renee Norris of Pucci Chateau in Nederland and veteran and longtime trainer B. J. Land are working together to help the dog and a veteran.

The dog, a Belgian Malinois, is getting medical treatment at Neighborhood Veterinary Centers, or NVC.

A gofundme account called “Sweet Malinois needs your help” is set up to collect donations to go toward vet expenses, food and supplies.

Norris said the dog was picked up by Port Arthur animal service and he was to be euthanized unless claimed. The dog had been hit by a car and was suffering from a broken hip and pelvis and a bad wound. Dr. Brady Hanson at NVC took the dog in for treatment.

“He’s such a sweet guy,” Norris said of the dog. “He will make an exceptional emotional support dog. I get to see him at lunch, and he crawls in my lap. He’s a really good candidate for a veteran in need.”

Once the dog is healed, it will go to Norris who will care for him as Land starts to work with him.

“I love it,” she said when asked how it feels to rescue the dog knowing he will have a good home and be partnered with a veteran.

This isn’t the first dog Norris has rescued. She has found other dogs to rescue and help them find good homes.

Land, 75, trained his first dog for competition at the age of 8.

“I’m a combat veteran and I know what the guys are going through,” Land said. “There are resources today that we didn’t have when I got back from Vietnam.”

Land is working with two disabled veterans in training their German Shepherds. Those dogs will learn to pull wheelchairs and pick up items for the owners among other things.

Since the Malinois was hit by a car he will be limited in what he can physically do so the dog will be trained strictly for Post Traumatic Stress illness.

Land said Post Traumatic Stress isn’t new and has been called different things through the years. In World War II it was called Battle Fatigue or the person suffering from it would be “gun shy,” where they would be traumatized when hearing a loud noise, he said.

When a person has a panic attack there is a chemical reaction in the body, same as for depression or even epilepsy. The dog can be trained to detect the change and assist the owner, he said.

Land said when alerted the dog will beg the owner for attention and if the owner is paying attention to the dog then he or she will forget the trigger.

Land said this is something he learned when he first came home after three tours in Southeast Asia. When something upset him he would distract himself, thus forget what was bothering him.

Training the dogs for fellow veterans is Land’s way of giving back, he said.

“When we got back from Vietnam we were called baby killers. We were criminals. We got spat on. We got trash thrown at us,” he said. “I know what they went through and I’m not going to let that happen to those who come back.”