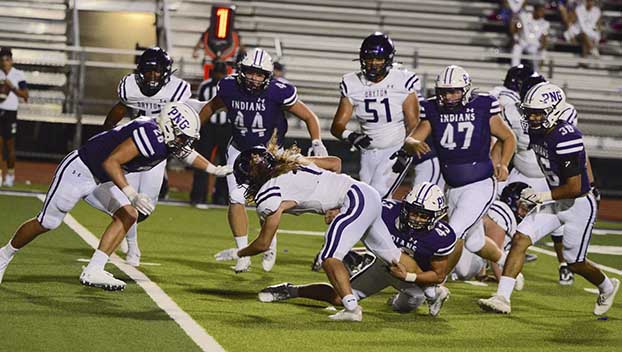 Shea Adams scored three touchdowns, including the game-winner with seven seconds left as the Port Neches-Groves rallied for a 35-28 win over the Dayton Broncos much to the delight of the Homecoming crowd at Indians Stadium on Friday night.

Adams scored just a little more than three minutes after the visiting Broncos had rallied from a 27-14 deficit to take a 28-27 lead with 3:11 remaining in the back-and-forth affair that at times resembled a track meet.

“We had our changes to put the game away earlier, but we failed to capitalize on our chances,” PNG coach Jeff Joseph said. “We have to do a better job of that. However, we came up with some big plays when we needed to.”

The Indians (5-2, 3-1 in District 9-5A Division II) kept their wining drive alive when Chance Prosperie made a big catch of a Cole Crippen pass. The Indians seemed to be setting up for a game-winning field goal attempt, when Adams had a big gain down to the 2-yard line in the waning seconds of the game. Adams followed that up with his game-winning score, as PNG handed Dayton its first division loss of the season.

The Indians kept Dayton’s dangerous running back in check for most of the game until Harrison scored on a 56-yard run with 3:11 remaining that gave Dayton a 28-27 lead, shocking the home fans.

“Harrison is a tremendous player,” Joseph said. He made a great move. But we didn’t fold and showed some resiliency.”

The Broncos (5-2, 3-1) wasted no time getting the scoring started, driving 75 yards on just three plays to take a 7-0 lead 71 seconds into the game on a 9-yard by Vernon Harrison. The Indians tied the game at 7 only 2:47 later as quarterback Cole Crippen connected with Shea Adams on a 25-yard TD pass.

PNG took its first lead of the game only four seconds into the second quarter on a 2-yard plunge by Adams. Dayton responded just 2:20 later when Holden Campbell scored from 1 yard out to tie the game at 14. Not to be outdone, the Indians needed 91 seconds to regain the lead, as Isaiah Nguyen bulled in from 3 yards out to make it 21-14 with 8:05 remaining in the second quarter.

Just when I looked like the game would turn into a track meet, both offenses began to sputter, with the only other score of the half coming with 19 seconds left in the half as Andres Sandoval’s 23-yard field goal made it 24-14 heading into halftime.

Sandoval added a 27-yard field goal in the third quarter to make it 27-14. The score remained that way until midway through the fourth quarter when the teams combined for three TDs in the final 5:03 to make it a memorable Homecoming contest for the PNG faithful.

Game ball goes to … Shea Adams with his three touchdowns is the logical choice.

Key Stats … Dayton held the ball for 9:10 in the fourth quarter as it staged its comeback.

Next up … PNG is at Santa Fe on Friday, while Dayton hosts Texas City. “Santa Fe is a much-improved team,” Joseph said. “We know we have to be ready for them.”