Port Arthur firefighter reflects on 50 years of service with department 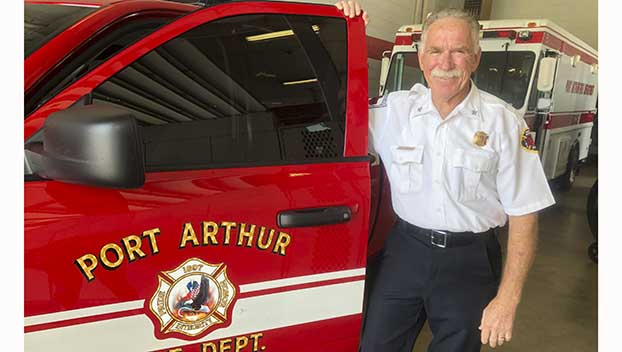 When asked what the best moment of the last 50 years was, Battalion Chief Patrick Murphy didn’t hesitate with his answer.

It had nothing to do with the number of fires or incidents he’s seen in his half-century with the Port Arthur Fire Department. It wasn’t a particular memory from one of countless shifts.

Instead, it happened outside of the station.

“The most memorable moment was marrying my wife,” he said. “She’s been with me since before I hired on here.”

And becoming a firefighter at the age of 18 wasn’t how the Port Arthur native expected to spend his life.

“I was looking for work. My father was reading the paper and saw the ad in the paper about the test and said, ‘if you’re looking for a job, go take the test,’” Patrick recalled. “So I went and took the test, and a couple of months later I was called and hired on. I didn’t know what I was getting into.”

He graduated from the fire academy in December of 1972.

“I came here for a shift, you get stuck on a truck, and you just go with it,” he said.

His first fire was not a structure, but a mattress.

“You just go in there and basically drag the mattress out the door or throw it out the window,” Patrick said. “Back then mattresses were pretty hard to put out once they got started, so you just wanted to get them out of the house.” 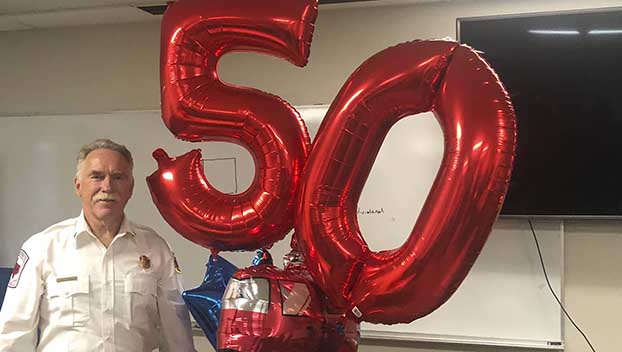 Battalion Chief Patrick Murphy was presented with balloons on Sunday, Oct. 8, which was the 50th anniversary of his hire date. (Courtesy photo)

Soon after he was moved to the station in Port Acres, where he worked until he was promoted to an engineer in 1975.

But unfamiliarity is something he no longer deals with, having celebrated his 50th anniversary with the department this past Sunday.

In fact, now it’s quite the opposite.

“He has a very strong work ethic and he advocates very strongly that his shift works as a team,” said Fire Chief Greg Benson. “His motivation is that calling he has internally for serving, and his purpose and desire to continue to do that for 50 years is a demonstration of his motivation.”

And despite the times they worry, said his daughter Christina Murphy, his family couldn’t be more proud of him.

“We just couldn’t imagine him doing anything else,” she said. “When we were younger we always knew we didn’t know if he would be home on the holidays because they would either get Thanksgiving or Christmas. We always valued the holidays when he was off.”

But they did, and still do, worry.

“We were always fearful of him being injured, especially because he acts without hesitation,” he said. “Even now we worry about him because he’s supposed to be on the sideline calling the shots, but we know if he’s in the danger zone. His men have to do it, so he will do it too.”

He’s been fortunate, she said, to only have received minor injuries.

And he recalled other ways in which he was fortunate — having been spared a fire with a fatality on one of his shifts.

But when it happens, it’s something felt throughout the department.

“When we come across a fatality, it’s always tough on everybody — especially when it’s children,” he said.

Now the department has employee assistance programs, debriefings and other ways to help firefighters cope with the emotional toll that can come with the job. But those did exist 50 years ago.

Throughout his career he’s worked his way up the ladder, so to speak, and served in every possible capacity. But he also picked up a second — and quite helpful — career.

Now all firefighters are required to have EMT certification, but that wasn’t always the case.

“I didn’t get my EMT until the late 80s, and that was something on my own,” Patrick said. “It wasn’t a requirement back then either, it was just something I did.”

But in the 80s when the city began suffering financial hardships, he started thinking of a backup plan and followed his wife into nursing.

After becoming a registered nurse in 1989, he worked part time at local emergency rooms while maintaining his job with PAFD.

And it still didn’t impact his ability to take care of his wife and four children.

“Even though he was always working, he always put his family first,” Christina said. “He’s always helping us. He’s truly in life service. And I think he touched so many lives being a firefighter and medic and nurse. I love him just like everyone loves their father, but I feel especially proud. We lucked out in the father department. Our dad is an amazing role model.”

PAFD will be honoring Murphy’s milestone with a luncheon today.