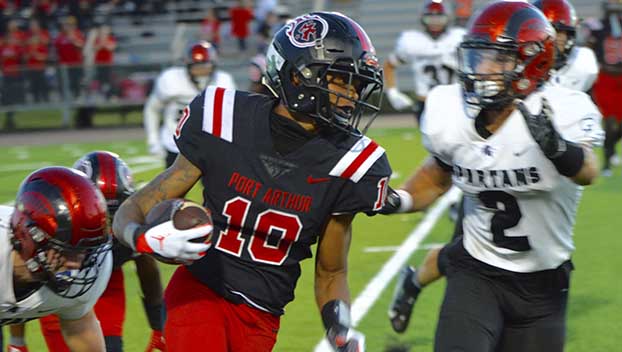 Memorial receiver Caleb Goodie is second in the district in yards and touchdowns. (Chris Moore/The News)

Memorial wide receiver Caleb Goodie has solidified himself as one of the area’s top offensive weapons, but you probably won’t hear much about it from him.

He is second in the district in receiving yards with 621 and six touchdowns. In last week’s 54-34 win over La Porte, Goodie recorded five catches fro 121 yards and two touchdowns. He also made his presence felt on special teams, returning two kickoffs for scores.

His play is a large reason the Titans are 6-0 on the season (4-0 in District 8-5A Division I). His performance was good enough to make him a finalist for the Mr. Texas Football Player of the Week. He is averaging 100 yards and a touchdown each week for the Titans offense. 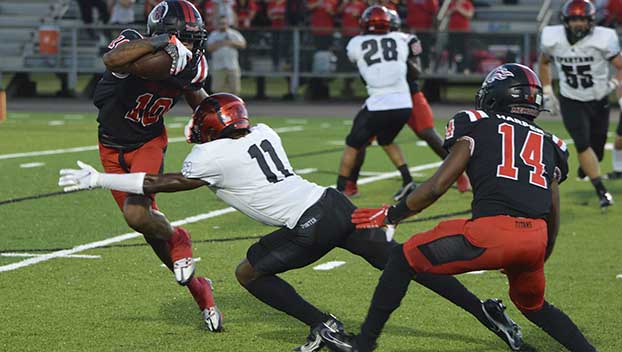 This week, Goodie made a social media post with the highlights from the game and a one-word caption that read “Different.” That post is the closest Goodie comes to bragging, as many coaches refer to him as a quiet kid. Goodie transferred to Port Arthur from Louisiana in January, putting him a little behind the recruiting schedule. However, if his performances keep up, he will likely start turning the heads of recruiters.

“I think he has a little chip on his shoulder because he doesn’t have any offers,” Memorial Offensive Coordinator Marcus Graham said. “He is flying under the radar. He is very quiet and kind of unsuspecting until you get on the field with him and he runs by you.”

While many athletes tap into an alter ego when they step on their field of play, Graham said Goodie is all business all of the time.

“He is pretty even keel,” Graham said. “He is more of a silent assassin. He is calm and level. He plays with a high motor. I have played with some guys like that. You wonder what they are thinking and then, boom. He has shocked a lot of people.” 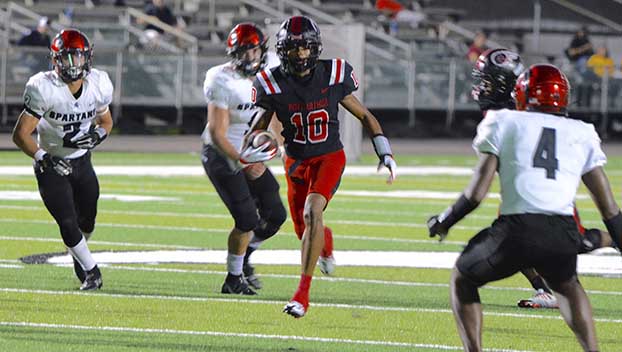 At 6’2”, Goodie’s speed seems effortless with longer strides that help him pull away from opposing defenders.

The size and speed combined with elite ball skills and the understanding off how to use his acceleration makes him a rare talent, according to Memorial Head Coach Brian Morgan.

“He runs really good routes,” Morgan said. “He gets separation. He knows when to give a little burst. He runs close to full speed and gains a lot of ground. He adjusts to the ball really well. Even on short throws, he wants to score. He doesn’t want to go down.”

Graham said the biggest challenge for the offensive staff is trying to find new and creative ways to get Goodie the ball.

“Every week we try to figure out a way to get him the ball and make something happen,” he said. “It is always a challenge, but it is a fun challenge. It is a good problem. We are blessed to have him on board.”

Goodie will have another opportunity to showcase that skill this week as the Titans host Goose Creek Memorial Friday. The Ganders have the district’s worst pass defense, allowing 225 yards through the air per game.