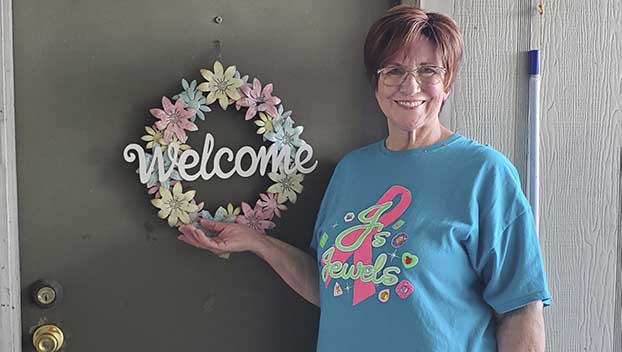 Dalfrey has always performed monthly self checks, and in 2009 she noticed something wasn’t right, but a mammogram didn’t pick up any abnormalities.

“The first time (cancer) when I felt it… I went a month or so before I even got to a doctor,” Dalfrey said. “It’s like you know something’s there. It’s like I knew but I didn’t know. Did I really want to know or, hopefully it’ll go away. In doing that, because of the waiting, if I had gone earlier it could have been a (stage) 2 instead of a 3.”

Dalfrey underwent six rounds of chemotherapy that made her “sick as a dog” and lose her hair. Her hair never grew back, normally, coming in in patches, she said.

She also underwent 31 sessions of radiation. The side effects were not as prevalent because the treatment targets a specific part of the body, but she did suffer skin blisters that she described as feeling like third degree burns. That radiation therapy side effect happened with both occurrences of cancer. 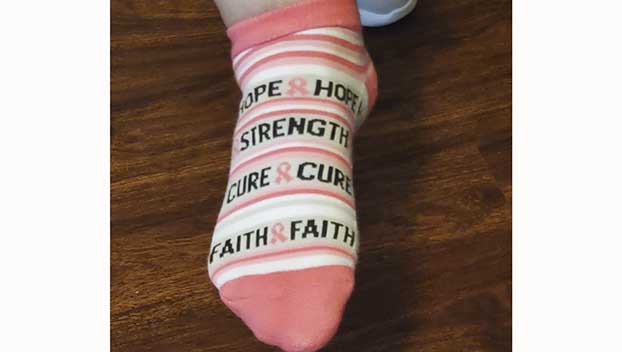 She was diagnosed with breast cancer again, this time in the other breast, earlier this year and again underwent a lumpectomy and radiation. Chemotherapy wasn’t required this time around, she said.

Her second cancer was picked up during a mammogram, which was more technologically advanced than the one 13 years prior.

“I did the mammogram and it showed something was not right. Then an ultrasound, then a biopsy,” she said.

This time around she only had to go through 20 rounds of radiation.

“I’m better and do a lot better,” she said. “I’m thankful God gets me up every day at my age with what I’ve been through and to go to work every day.”

The cancer survivor is an insurance representative at The Medical Center of Southeast Texas.

Dalfrey said she cherishes every day because you don’t know when it will be your last. 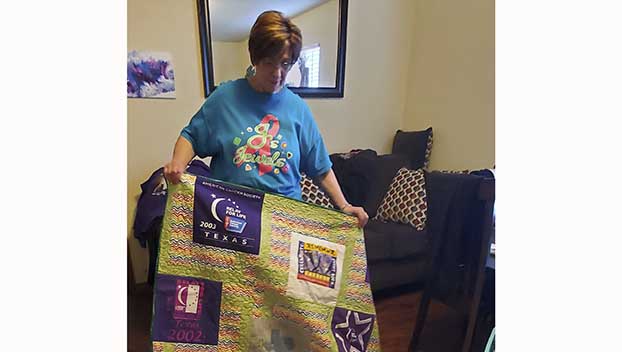 Jeanette Dalfrey shows the quilt she won in a raffle during a previous Relay for Life event. (Mary Meaux/The News)

According to the American Cancer Society, breast cancer is the most common cancer in women in the United States except for skin cancers. It is about 30 percent or 1 in 3 of all new female cancers each year.

Having a support system is important physically and mentally. Dalfrey was living in Colorado at the time of her first bout and a good friend Beverly took care of her.

By the end of her treatments she had moved back home and had support from family here as well as her apartment support, Mollie, James and Jerry.

She offered some advice to others who may go through breast cancer.

Dalfrey takes part in the local Relay for Life events, which raise funds for cancer research. She even has her own team — J’s Jewels.