The Memorial Titans are off to a 5-0 start for the second time in three years. Memorial enters the week ranked No. 5 in the state for 5A Division I and plays La Porte on the road Friday.

One reason for the Titans’ success is the offensive line, which has anchored a stellar rushing attack and has largely kept quarterback Davion Wilson clean. 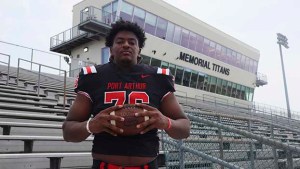 The line is anchored by left tackle Cayden Bowie, who has received serious attention from Division I college football programs. Bowie verbally committed to the University of Houston over the summer and is expected to sign a national letter of intent later the in the school year.

He also represented the Titans on the cover of the Port Arthur News football preview section.