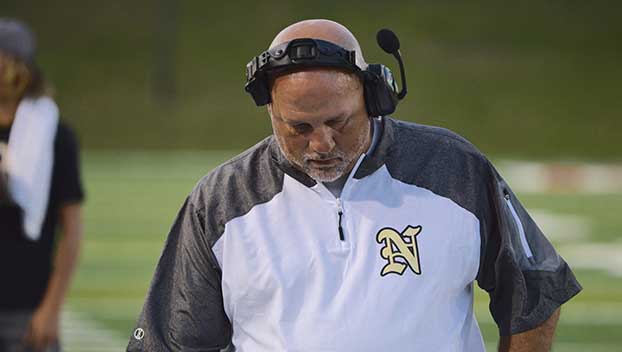 SANTA FE – In a fast-paced game that alternated between long possessions and quick interceptions, Santa Fe’s 41-18 win over the Nederland Bulldogs was full of surprises.

Junior quarterback Kase Albrecht and senior linebacker-turned-running back Jackson Stroud teamed up on offense to incrementally move the ball down the field through quick runs for low yardage and strategic passes.

Santa Fe coach Blake Ryder said the offense has to know how to run the ball to set up play action passes. But there was no one kind of offense Friday night as Stroud dominated the second half with short, powerful runs up the middle.

“Jackson Stroud played running back for the first time all year because we needed him to step up, and he stepped up in a big way,” Ryder said following the post-game huddle. “When it came time to throw the ball, Kase (Albrecht) did a great job.”

The Indian defense, anchored by Stroud and junior Franklin Alfaro, worked to keep the Bulldogs’ offense at a stand-still. The second half was rife with interceptions by both teams, but Santa Fe capitalized on each of theirs for touchdowns.

“This defense we run isn’t really easy to learn so that had something to do with how we started out the season,” Ryder said. “But they’re starting to learn the adjustments and everything it takes for this defense to be successful. I couldn’t be more proud of their effort out there tonight.”

The victory was not without its mistakes, and plenty were made by both teams from start to finish. Santa Fe made its first fumble six minutes into the game but Nederland was not able to capitalize and turned the ball over.

On their next possession, the Indians were focused on keeping the ball for four first downs until the end of the first quarter. Starting out the second quarter, Stroud had back-to-back runs for 23 yards and a touchdown.

What appeared to be a play action for a two-point conversion was actually a quick-scramble after a fumbled snap by Santa Fe. Junior Case McGee passed to a receiver in the end zone for an extra point.

“We all played together, had a good game and just did everything we needed to do,” Albrecht said. “(Mistakes are) just something we always prepare for every day in practice.”

The Indians scored a third touchdown with three minutes left in the first half but the Bulldogs blocked the kick attempt and ran the ball down the field to pick up two more points.

In the third quarter, fumbles followed fumbles. Nederland was able to key in on Stroud at running back, which he said made it a pretty exhausting game.

In the post-game huddle, Ryder was real with his players. They need three more wins to clinch the playoffs, but he said there’s no way they can turn over the ball that much, make mistakes on special teams and have an exorbitant number of penalty yards.

“What lets me know and you know and everybody know that we’re a winning team is we made all of those mistakes and still came out here and won,” Ryder said. “Santa Fe is not supposed to beat Nederland, boys.”

By the final play of the game, the Indians were up by 19 points. Nederland had put in its second string players, but Santa Fe was still going full-speed. Junior running back Joseph Floyd intercepted the ball as time ran out.

“We made mistakes, but we played hard enough to overcome them,” Ryder said. “That’s what Santa Fe is: hard-nosed, blue collar young men that never give up and play hard, and that’s what we did.”