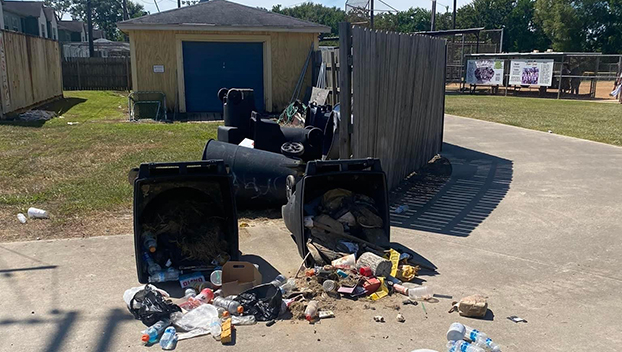 Damage is shown at a Nederland softball league. (Courtesy photo)

NEDERLAND — The Nederland Girls Softball League is reeling after vandals caused approximately $500 in damages over the weekend.

Gerardo Montoya, the league’s president, learned of the damage when another coach called him Sunday. The fields are located by the Marion & Ed Hughes Library on 27th Street.

“On the weekends right now, we are usually at other parks,” Montoya said. “We were in Orange. Our younger girls were in Vidor, so no one was really at our fields. The coach got there Sunday and came across all of the trash thrown everywhere and glass broken, all of the stuff on the field and on the sidewalk. He sent me a bunch of pictures. They cleaned up the field because they still wanted to have practice.”

The vandals dumped out several trashcans, broke lights and broke a refrigerator in a concession stand. 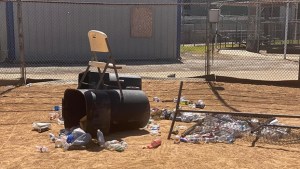 The vandals dumped out several trash cans, broke lights and broke a refrigerator in a concession stand. (Courtesy photo)

This isn’t the first time vandals have targeted the softball field.

”We had our fence done a few years ago,” Montoya said. “When they redid it, they created about a 14 foot opening on the 27th Street side. We put up barricades before but they go right through them. We don’t get donations like the boys’ leagues. With whatever money and time we have, we will do it.”

The president said the vandals caused approximately $500 in damages.

”We are hosting two tournaments at the end of October and this is a bit of a setback,” he said. “Now we have to buy new lights. It feels like we can’t catch a break. They also damaged some padlocks, where they tried to break in. They weren’t successful. The broke padlocks to our Heritage Festival trailer but luckily it was double padlocked. We have pictures of girls from the past, who won state championships and titles for the league. They wrote on the girls’ faces and ripped pictures.”

Montoya, who can be reached through his Facebook, said the league is in the process of putting up cameras to help catch any trespassers. The league can also be reached by emailing NederlandGirlsSoftballLeague@gmail.com

Nederland Police Chief Gary Porter said the league filed a police report, adding officers are patrolling the area. He said anyone who lives in the area or is passing by should contact police if they see anyone at the fields during non-operational hours.