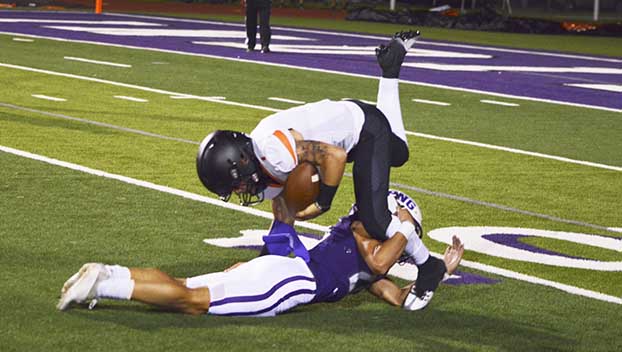 PORT NECHES — Port Neches-Groves football received an extra home game thanks to work being done to upgrade a stadium in Fort Bend County.

PNG was originally scheduled for the road this week, but the game was moved to Port Neches due to ongoing renovations at one of the Fort Bend stadiums.

Head Coach Jeff Joseph said the decision was made during the Spring and added he was glad to get an extra home game and not have to make another long road trip.

Kickoff is set for 7 p.m. Friday in Port Neches.

“We feel pretty good,” Joseph said. “We are just taking it week by week. We just want to win this game Friday night.”

PNG was without several contributors in the win over Texas City. Joseph is hoping to get at least some of them back in the lineup this week.

PNG enters the week with the district’s third-ranked offense (384 yards per game) and the fourth-ranked defense (288 yards per game). It is worth noting PNG faced the top two defenses in the district in the first two games with Fort Bend Marshall and Texas City. Those two teams also hold two of the top-four spots for defensive rankings.

Willowridge holds the seventh-ranked offense and defense in the eight-team district. The Eagles rely heavily on the passing game, led by quarterback Kendron Penson Jr., who has attempted 132 passes this year (26 per game). That is the most in the district. For comparison, PNG quarterback Cole Crippen has attempted 118 passes.

“They have some good skill players,” Joseph said of Willowridge. “They have a quarterback, who is pretty athletic and can make some plays. They have some athleticism on both sides of the line of scrimmage.”

The Eagles have only rushed for 239 yards on the season, which is the lowest in the district by more than 400 yards.

PNG receiver Chance Prosperie enters the week No. 2 in the district in receptions (25) and yards (363). He is in a tie for first in touchdowns with four.

Running back Isaiah Nguyen is third in the district with 420 yards on 74 carries.