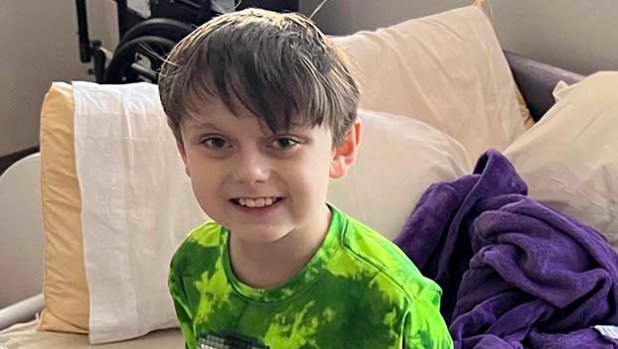 Branson Shaw, 10, is a patient at Texas Children’s Hospital while doctors try to find a diagnosis for his chronic pain. (Courtesy photo) 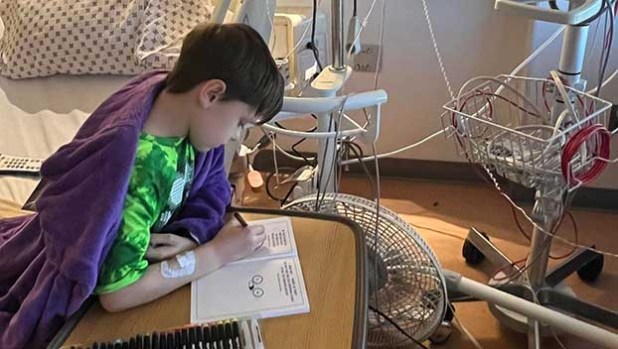 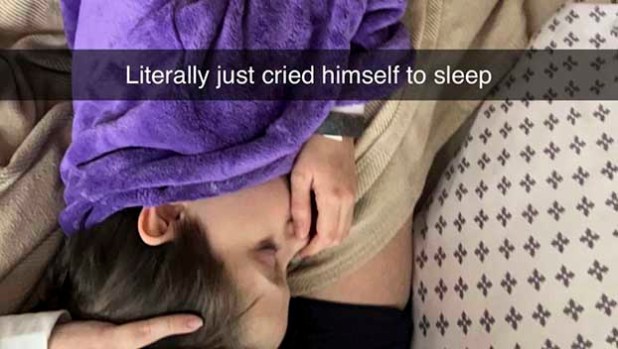 His mother posted this photo after Branson cried himself to sleep. (Courtesy photo) 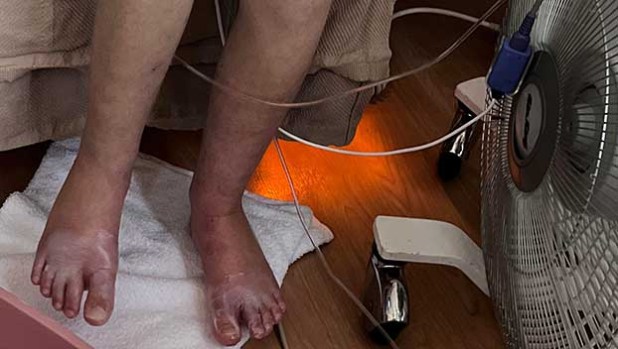 Branson is also experiencing swelling along with the pain. A fan blows on his feet when his feet are not in water. (Courtesy photo) 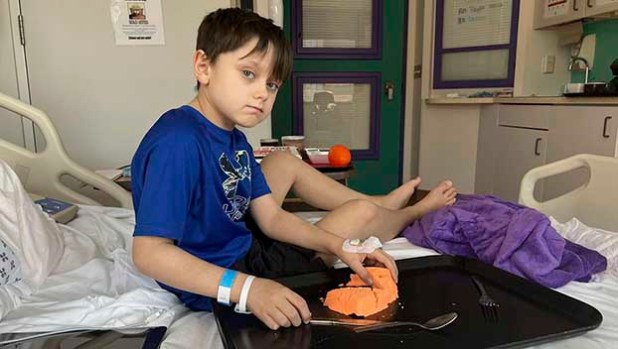 Branson sits in his hospital bed during his stay at Texas Children’s Hospital. (Courtesy photo)

A GoFundMe account has been set up to help the family of a local child that is battling a painful unknown illness at Texas Children’s Hospital in Houston.

Branson Shaw, 10, is the son of longtime radio personality Brandin Shaw and his wife Stephanie, who works as a secretary at a local church.

Approximately three weeks ago, Branson started to complain about leg and foot pain, so his mother gave him ibuprofen, thinking it was growing pains.

The family got a call from his school about 10:30 a.m. the next morning saying he was on the floor crying in pain and couldn’t get up. They made a trip to his pediatrician but at that time the pain wasn’t as severe as it is now. He had a low-grade fever and suffers from skin sensitivity, but there was nothing to explain what he was going through. X-rays and blood tests came back normal.

By that Sunday he was getting progressively worse and the pediatrician suggested they go to Texas Children’s Hospital.

Summer Molanders, Stephanie’s sister, said Branson was there from Sept. 18 to Sept. 22 and went through a week of testing and pain management. A diagnosis of serum sickness was given but the family didn’t feel the diagnosis was correct.

Molanders said they discovered Branson felt better if his feet were soaking in cold water. He was discharged and went home but the pain became unbearable by that weekend.

The child was having what the family called episodes of the pain, which is a burning type of pain in his toes and balls of his feet that later started to affect some of his fingers. Back home, his pediatrician got to witness an episode and called a neurologist in Houston, who also witnessed an episode and he was admitted back to Texas Children’s Hospital.

Branson has a number of specialists working on his case. Dermatologists are worried about the effects of soaking his feet will have on his skin and he has an entire team for pain management.

“This past weekend, on Sunday, was really rough,” Molanders said. “They almost moved him to (the Intensive Care Unit) just so they could up his dose of pain meds.”

Instead, the ICU team has visited him.

“It’s gut wrenching,” she said. “I didn’t even know how bad it was until I went to visit Sunday.”

She also finds it difficult to see Branson’s parents as they watch their child go through this.

“(Right now) there’s no end in sight, no light at the end of the tunnel. It’s really hard on them,” she said.

Branson is still undergoing testing, the next of which will be genetic. Doctors also want to do a biopsy of the child’s feet but that would impede his ability to soak them.

When his feet are out of the water he has fans blowing on them continuously.

Branson has been given strong pain medication, some of which include morphine, dilaudid, and ketamine, she said.

Stephanie shared on Tuesday a photo of Branson in the hospital covered in a blanket being held by a parent. Across the photo it says, “literally just cried himself to sleep.”

Molanders described Branson as witty and very smart — he’s in gifted and talented classes at school, loves video games, has a group of friends and is a really good kid who’s never gotten in any type of trouble.

While in the hospital he tries to stay busy with video games when the Wi-Fi works and with drawing, his aunt said.

For now the family feels helpless, which is why Molanders decided to start the GoFundMe.

“We’re just praying and getting the word out so more people can pray for him to get answers,” she said. “We just hope Branson knows everyone loves him and so many people are worried about him and are praying for him.”