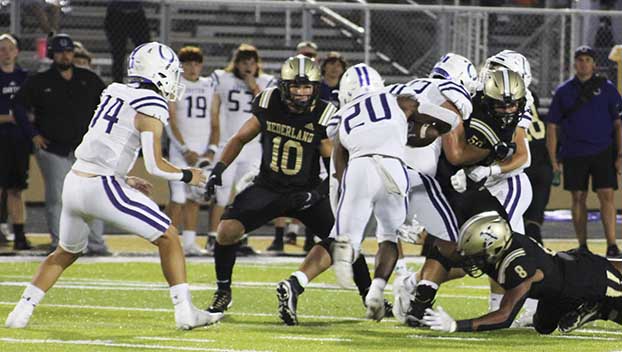 NEDERLAND — After a homecoming game to forget, the Nederland Bulldogs are quickly turning their attention to Santa Fe.

The game is set to kickoff at 7 p.m. Friday in Santa Fe.

The Bulldogs (1-4, 1-1 in District 9-5A Division II) are coming off a 45-0 loss to Dayton, but Head Coach Monte Barrow said his team is going to learn from the mistakes and move on.

“We always put in front of them that we are going to take the negative, whether it is in a win or a loss,” Barrow said. “But we keep our fate in our own hands. As of right now, Dayton is the only team that could go undefeated and keep us from winning the district championship. The goals that you set before a season are still in tact. We still want to attain those goals. Kids are more resilient than adults. They will bounce back.”

“They have a new coach over there that came from Texas City,” Barrow said of Santa Fe. “They are doing a lot of the things they do. Defensively, for us, we have to look for certain things they do out of certain formations.”

Barrow said his offensive line has to be ready due to the amount movement the defensive line does after the snap. Santa Fe likes to run stunts with linemen, which is where two linemen will switch places after the snap in an attempt to confuse the offense and get a free player to the quarterback.

Barrow said his team has focused on turnovers in practice this week after the Bulldogs turned the ball over four times in the first half against Dayton.

“We talked about it and implemented drills in practice to feel comfortable about it,” he said. “I think a lot of it was us being a young team. When something bad happens early, we don’t know how to pull ourselves out of it just yet. It doesn’t seem to be game to game. We have to understand that things are going to be up and down in a football game. If it happens to start early like that, we have to be able to make adjustments and come back.”