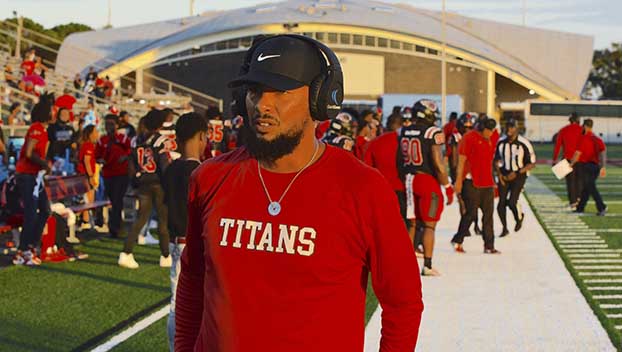 Andre Bevil is a new face on the Memorial sidelines, but he is far from a stranger to Southeast Texas football.

From the sideline, he can be seen calling plays and often talking with quarterback Davion Wilson. Coming from Beaumont United’s track program, Bevil has earned the title of quarterback coach and passing-game coordinator.

His journey has taken him across the football hotbed of Southeast Texas and around the state.

His quarterback play landed him a spot at Navarro College. In 2008, he helped lead the program to a 10-1 record and a No. 5 ranking in the final National Junior College Athletic AssociationFootball.com Poll. In his freshman year, he was coached by Ray Woodard, who ended up leaving to help reboot the Lamar University football program.

Bevil said Woodard eventually had about seven players with him to help jumpstart the Lamar football team.

“We helped him get the program off the ground,” Bevil said. “There were about seven of us from the Golden Triangle area that he pulled in the office and said ‘I’m going to your hometown. Do you want to go with me?’”

The timing lined up so well for Bevil that he still gets goose bumps when telling the story.

The former quarterback said the move was a bit of a leap of faith, but he appreciated how Woodard let the players have ownership of the team.

“He pulled us in and let us decide which company we wanted to sponsor us,” Bevil said. “He went with the kids’ vision and that meant something to me. We were able to put our own stamp on the program. We got to decide if we wanted Nike, Under Armour and all of that. We were working out at the rec, and they were building us a facility.”

Bevil wasted no time making his mark at his new school. Although Lamar lost the first game back to McNeese 30-27, the quarterback lit up the stat sheet with 426 yards through the air and three touchdowns.

The Cardinals finished the season 5-6 the first year and 4-7 the following.

Bevil credits his work ethic for his ability to stay ready for the next step in life.

After college, Bevil worked out for a few NFL teams, but they implied he might have to change positions if he wanted a shot.

Bevil said he is grateful for everything the sport has provided him and wants kids to know how much it can do for them.

“Football has driven me to get an education for free,” he said. “It has given me the mentality to attack life. To this day, I still work with kids around the area and let them know football can be a vehicle to drive you through life.”

After a little time at Baytown Sterling, Bevil caught on at Beaumont Central as a quarterbacks coach.

After a coaching shuffle, Bevil went back to Baytown for a year before returning to Central as a passing-game coordinator. However, it was short lived.

In 2017 Hurricane Harvey hit Southeast Texas and changed the makeup of Beaumont ISD in the process. Central combined with Ozen High School to make Beaumont United.

Bevil earned a spot on Arthur Lewis’ offensive staff. He eventually decided to step away from football for personal reasons.

“Eventually, I asked (Morgan) what it would take to get me over here,” Bevil said. “He listened to the people he is grounded to and they told him I am a good guy.”

The Titans have reaped the benefits of Bevil’s coaching early in the season. Memorial entered the week undefeated and featured the district’s top offense, averaging 424 yards per game. Wilson has completed 75 percent of his passes and receiver Caleb Goodie is second in the district in yards.

“He brings energy and a very stern, disciplined personality,” Morgan said. “More than anything, his personality compliments the others we have. We have some laid back guys and some who are more on edge. He is more on edge and it is a good balance. He has a good sense of focus.”

However, Bevil said his goal is not to simply to have a top-ranked offense.

“The No. 1 goal that I have been trying to push is going to win state,” he said. “We have the ability and the talent to do it. We just have to get the kids to see that vision. They have all of the raw talent here. We just have to buckle down and continue to push them. I think we will get to where we want to be at Week 16, hopefully.”