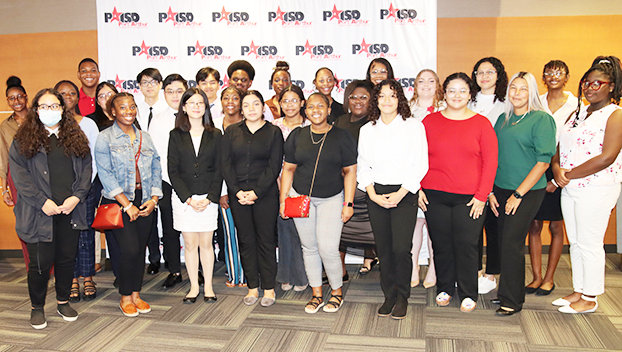 A group of seniors from Wilson Early College High School will be working as substitute teachers and tutors in elementary schools in the Port Arthur Independent School District. (Courtesy photo)

What started as the need to address a substitute teacher shortage led a group of students to embark on a special path.

Twenty-eight seniors at Wilson Early College High School will be working as substitute teachers and tutors in elementary schools in the Port Arthur Independent School District.

Adrienne Lot, district media and communications specialist, said it was Superintendent Dr. Mark Porterie who came up with the idea of using the Wilson students who had enough college credit hours at the elementary schools.

“All of the students have to have at least 30 college credit hours right now and the flexibility in their school schedule to serve as a sub two to three days a week on non-consecutive days,” Lott said.

The students will not go blindly into the classroom. They will each have an assignment and a mentor teacher assigned to them.

In addition there are instructional coaches at the campuses, and they will have the support of district curriculum advisors.

Kaci Randals is one of the Wilson students who will work as a substitute. She said it’s a great opportunity to work in such a demanding field, adding teaching is one of her interests.

To prepare, she attended a training session and during the summer worked with children at a camp. While they weren’t elementary-age, it gave her the chance to see the needs of the children.

Several teachers who inspired Randals, but it was a third grade teacher who was so welcoming that she made a lasting impression.

“This is a really good opportunity for us and an opportunity for the younger kids to see that there are things they can do at a younger age and not be limited,” Randals said.

Wilson Principal LaSonya Baptiste said she has an amazing group of seniors in the Class of 2023.

“They serve in numerous leadership capacities on campus, are well versed, personable and high performing,” Baptiste said. “We thought this would be an ideal opportunity for them, while also meeting the needs of the elementary campuses during this critical time.”

The seniors start work in two weeks and will be strategically assigned to elementary campuses across the district. Leaders want the seniors to work on the same campus the whole school year, thus allowing them to work with the same students in teaching and in small group tutorials.

“We are very proud of our students and look forward to continuing this initiative for years to come,” she said.

The group of seniors took part in orientation last Friday and spent the day with the curriculum advisor.

“They seem to be really excited about the opportunity, and basically it’s an extension of (the district’s) grow your own,” Lott said.

The district is assisting some of its employees in getting teaching certifications.

“When this program is a success, it can open the door for students to pursue a career in education or allow them to work while working towards a degree,” Lott said.

The program has already gotten the attention of underclassmen, who are excited and asking when they can participate, Lott said.

“We are excited about it and proud of the students,” Lott said. They are so enthusiastic. They came to that orientation ready. All the guys had ties, and the girls had suits. They made a very good first impression. We are just excited and ready to put them to work.”