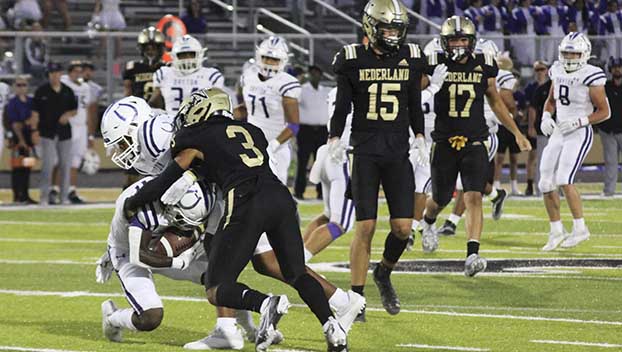 After Nederland’s offense went three and out, the Broncos put together a sustained drive from their own 38 to the Nederland 12. The drive included a 4th down conversion and a recovered fumble. When the Bulldog defense stiffened, Brayan Montes kicked a 27-yard FG to extend their lead to 10-0.

Nederland’s offense was plagued by turnovers in the first half, losing two fumbles and throwing two interceptions to Harrison and Jakari Cooper. QB Ayden Sunday was under constant pressure from the Dayton defense. RB Hubert Thomas, the team’s leading rusher, was held to only 26 yards on 6 carries in the first half. 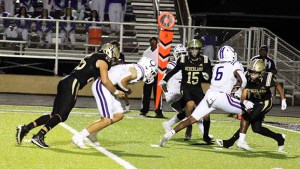 After recovering a Bulldog fumble at the end of the first quarter, Dayton struck again. After a three-play drive, Harrison scored from 2 yards out to increase the Bronco lead to 17-0.

The Broncos then held the Bulldogs to three offensive plays, forced a punt.

Dayton then only needed four plays to score, with a 65-yard pass from Horton to sophomore Braden White. Montes’ fourth PAT kick made the score 24-0.

Dayton’s Harrison added two more TDs in the 3 rd quarter with carries for 32 and 2 yards. Dayton closed out their scoring in the 4th quarter on a 26 yard slant pattern

from Horton to C. J. Hubert. Nederland’s Joseph Dugat recovered a bad snap at Dayton’s 43 in the 4 th Quarter.

The Broncos rushed for 388 yards. Harrison led the charge with 150 yards and 4 TDs.

Horton led all passers with 176 yards on 12 completions of 33 attempts and 3 TDs.

The game ball goes to… Vernon Harrison for superior play on both offense and defense.

Up next… Continuing District 9-5A Division 2 play, Nederland travels to Santa Fe while Dayton hosts Galena Park next Friday. Both games kickoff at 7 p.m.