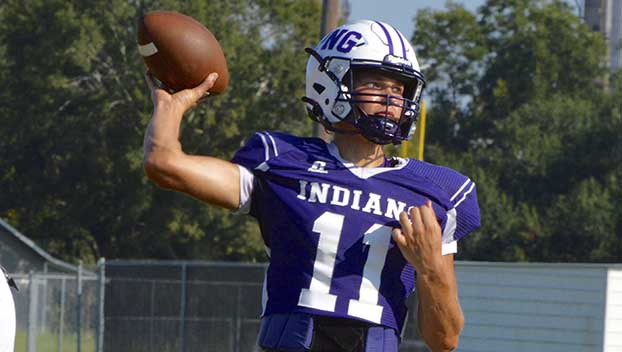 PORT NECHES — The Port Neches-Groves football team might have the toughest start to district out of all the teams in District 9-5A Division II.

PNG is coming off a loss to Fort Bend Marshall, ranked No. 3 in the state, and now turns around and play a competitive Texas City, who features the top-ranked defense in the district heading into Week 6.

Kickoff is set for 7 p.m. Friday at PNG Stadium.

“It would be a shorter answer if I said what weren’t there strengths,” Evans said. “They have big offensive and defensive lines. They have extremely fast receivers. Everyone thinks of Marshall and thinks speed. To see the way those receivers were able to get past their defensive backs last week. Those quarterbacks and running backs are good, too. This is a well-put-together team.

Evans said the team fits the mold for how PNG football should be played.

Many coaches have mentioned just how imposing the PNG offensive line is. A good offensive line can be difficult to game plan around. If a team is facing a fast receiver, defenses will either double or triple team him or play coverages further back in order to not get beat deep. Mobile quarterbacks will often see dulled pass rushes in an attempt to limit running lanes and keep him in the pocket.

Having an advantage on the offensive line allows that team to lean on teams late in a game by running the ball and it is difficult to scheme around for a defensive coach.

“It is hard,” Evans said. “What makes it harder is that you can put as many people in the box as you want, but those receivers will hurt you bad.”

PNG receiver Chance Prosperie leads the district with 20 catches. He is second in yards with 243 and two touchdowns.

PNG enters the week with the third-ranked defense in the district, allowing only 264 yards per game, compared to Texas City, who has held opponents to 200 yards per game.

The Stings also feature a heavy rushing attack with junior Caleb Bell leading all rushers with 67 carries. He is second in yards with 568 and six touchdowns.

Evans said the game could likely come down to who plays the closest to mistake-free football.

“We have to control the clock.” Evans said. “I am a defensive guy. If they don’t have the ball, they can’t score. We are going to do our best to manage the clock and limit their number of possessions. We have to play sound football and not gamble too much.”

While Evans was not the head coach for TC last year, the two teams faced off in a classic, with the Stings escaping Port Neches with a 49-42 overtime win.