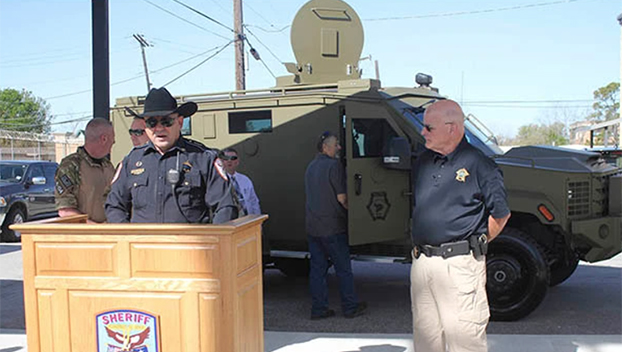 Orange County Sheriff Jimmy Lane Mooney was thrilled earlier this year about the department getting a high-powered arsenal Lenco Bearcat that will be a game-changer. (Van Wade/Special to The News)

ORANGE — Orange County Sheriff’s Office is continuing to crack down on illegal drugs.

Sheriff Jimmy Lane Mooney said he made this his goal when he became sheriff. He has a special unit dedicated to ridding the community of illegal drugs.

Recent drug busts made by the unit are gaining attention.

One such bust was during highway interdiction in which an individual was caught with upwards of 99 pounds of marijuana. The drugs, Mooney said, were headed to Atlanta and beyond and were likely picked up in Houston.

Houston, he said, is a known source and hub for narcotics.

The drugs were also allegedly destined for Maryland.

In addition, law enforcement believes the driver of the vehicle, Malika Patterson, was using stolen and fraudulent identifications to further criminal activities.

Numerous checks and credit cards with various names and addresses were located, and this information has been referred to Georgia and Maryland officials for further investigation, according to information from OCSO.

Another recent narcotics related bust came with the arrest of Job Allen Smith.

Mooney said a search arrant was executed late last year in regards to the distribution of heroin.

The case, the sheriff said, was investigated six months before the arrest, adding SWAT was utilized in the arrest.

Drugs as well as weapons were found at the location.

The FBI adopted the case and presented it to the United States Attorney’s Office for federal prosecution. Smith was indicted by a federal grand jury.

The specialist unit also had a hand in busts at local game rooms where criminal activity occurred.

Mooney said the narcotics unit is a special operations squad and handles anything that requires special attention, which includes the game room work.

When Mooney took the position, he said he totally revamped the narcotics unit and added two drug-sniffing dogs to the department.

One of his future goals is to add two more, one per shift. But this decision is dependent on the budget. He’s also like to add a few more officers to the team. Currently, there are six individuals on the unit.

But either way, the unit will continue to work its goal and also assist other agencies in need.