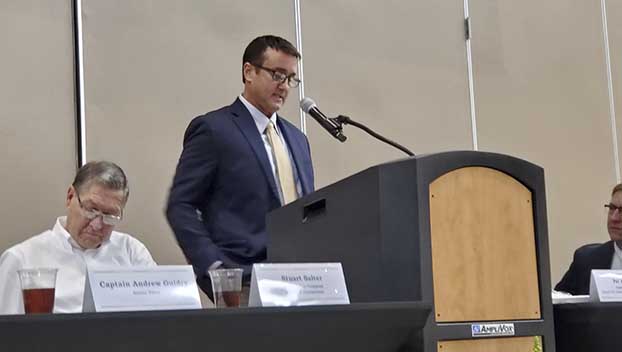 The Greater Port Arthur Chamber of Commerce’s recent Leadership Breakfast was a lesson in some of the biggest projects ongoing while providing information on just how important Port Arthur is to the state and nation and beyond.

Sabine Pilots Captain Andrew Guidry, who serves as president of the organization, summed it up succinctly, calling the happenings a “modern day Spindletop.”

He’s correct in the analogy.

The local maritime industry is seeing a boom with a number of terminal expansions and the deepening of the ship channel.

Tankers, he added, make up over half of the vessel traffic.

Being aware of the upcoming terminal expansion is important to the Pilots’ role on the waterway.

Cheniere Energy has added a third berth to its property and when fully active, there will be another 100-300 ships per year.

Golden Pass is expected to go online for export in the summer of 2024. This means an additional 200 or more ships per year.

Howard Energy in Port Arthur added a second berth behind Texaco Island, and Valero ship traffic is expected to increase by 20 percent in the near future.

Exxon’s Blade Project is expected to go online July 2024 and with that comes another 10-15 ships per month. Plus Energy Transfer is adding a couple more berths as well, he said.

The duty and mission of the Pilots is to maintain the safety and environmental integrity of the waterway. Harbor pilots such as the Sabine Pilots are state and federally licensed mariners tasked with the safety of navigating the vessels in open sea and back.

There is currently a major project to deepen and extend the ship channel an additional 12 miles, which is something that will affect the Pilots.

“Our whole method of pilot dispatching and boarding will have to change because they’re extending the channel about 12 miles and right now we have a one hour pilot boat,” he said.

The additional miles makes for additional time to get to and from the boarding area. This could mean a 3-hour round trip.

One possible solution is helicopters bringing the Pilots to the ships.

“The Sabine Neches waterway traffic maritime commerce is approaching historic levels,” he said. “A modern day Spindletop if you may. We’re excited the pilots are part of this unprecedented growth and expansion.”