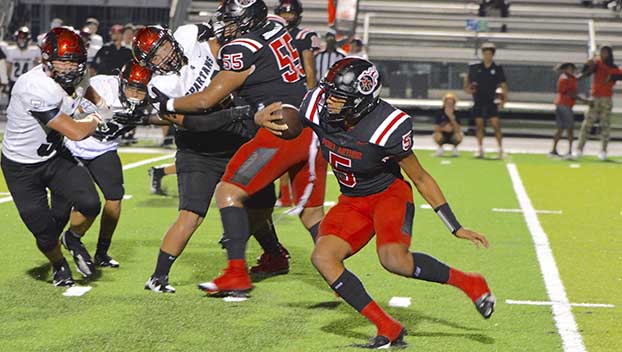 The Titans returned to form last week with a 40-point win over Baytown Sterling, but there is little time to celebrate as a dangerous Crosby team comes to Port Arthur.

Prior to the start of the season, many had this Friday circled as one that could potentially determine the district champions.

The Titans enter this week 4-0 and 2-0 in District 8-5A Division I. The big surprise has been Crosby, reaching the last week of September with a 2-3 record (1-2 in district). The Cougars are coming off a 49-22 loss to Kingwood Park.

Memorial Head Coach Brian Morgan said the film shows Crosby has had to deal with several injuries that forced the team to shuffle around many key players.

“They have played some really good teams,” Morgan said of Crosby. “I have seen them play in person twice. It is just the way things have worked out for them. They were up 15-3 on Kingwood. They didn’t get a fourth down, and the momentum kind of flipped. It went back the other way.”

Morgan has high praise for Crosby quarterback Cyrin Myles, who is second in the district for passing and rushing yards.

“The quarterback is legit,” Morgan said. “We have to stop him. He can legitimately win the game by himself. He is very similar to Jah’mar (Sanders). They have a couple of backs, who are bigger kids.”

Crosby running back Levi Fontenot is second in the district in yards (476) and has four touchdowns on the season.

Memorial quarterback Davion Wilson is coming off his best game of the season, Morgan said. Against Sterling, Wilson completed 17 of 21 passes for 224 yards and three touchdowns. He also rushed for 53 yards on eight carries and 1 TD.

“I thought he played really well and got the ball where he was supposed to,” Morgan said. “We truly feel like we have some really good skill players. If you spread the ball around to those guys, they can make plays. He ran way too much against Porter and tried to do some things outside of the scope of what we asked him to do. He is a competitor and wants to make a play, but he would’ve been better off doing what we coached him to do.”

Morgan said the results showed how potent the offense could be when all of its pieces are clicking.

Titans leading receiver Caleb Goodie is second in the district in yards and tied for third with four touchdown catches. He also averages 22 yards per catch on 22 catches.

The Titans defense has also been staggering. Even though Memorial is one of three teams in the district to play four games (the others have played five), the Titans are the only team to have not allowed 100 points on the season. Crosby would have to score 40 for Memorial to reach that mark.