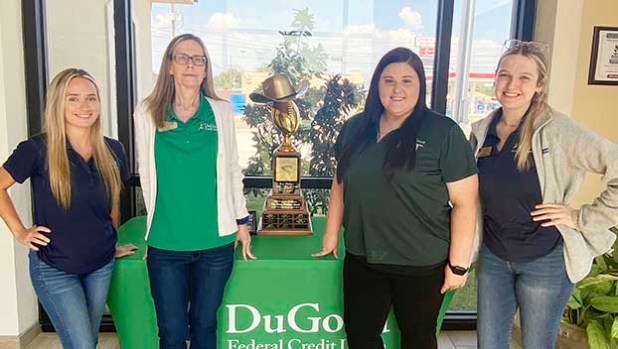 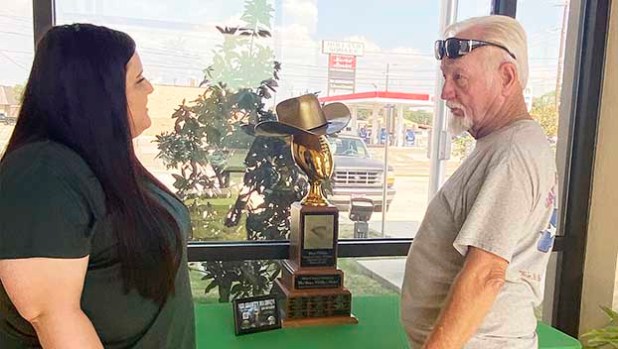 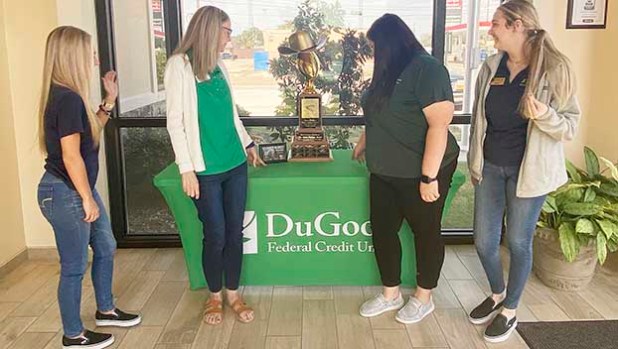 The Nederland graduate is the branch manager of DuGood Federal Credit Union in Nederland, which will be hosting the Bum Phillips Bowl Trophy as it makes its way throughout Mid County businesses ahead of the Oct. 28 matchup.

“Being in Nederland we get a lot of people in who are, ‘Go Bulldogs,’” she said.

The trophy was delivered to the facility, located at 2708 Nederland Ave., Friday to a host of employees who were happy to help set it up near the front doors, where customers and community members alike can stop by and view it or even take pictures with it.

Customer Glenn Sanders was excited to see it up close, noticing the details that include plaques displaying the scores from each year since the trophy’s inception in 2014 when Mid County Madness, coined in 1994, became known as The Bum Phillips Bowl.

However, the rivalry has been in play much longer, beginning in 1925.

The game has previously been listed by Dave Campbell’s Texas Football Magazine as the No. 1 high school football rivalry in Texas.

“I’m a little bit biased, but I think it’s well embraced statewide as the No. 1 rivalry in the state of Texas,” said former Port Arthur News Sports Editor Bob West.

West was instrumental in the creation of the trophy.

“Bum’s wife give us the photo on the trophy that added a touch of class to it,” he said. “The whole idea is I wanted to keep Bum’s legacy alive. As long as that trophy sits at those schools and people take pictures with it, his memory will live on. He was such a special person.”

Phillips died in his home on Oct. 18, 2013 at the age of 90 — as Mid County Madness was being played for the 90th time, according to Port Arthur News archives.

The trophy named in his honor is now given to the winning team at the end of each game and displayed at its high school until the end of the school year.

And the monument itself, West said, has added even more to the game.

“It was a great rivalry before the Bum Phillips Trophy, but I think the trophy has given it a wider profile,” he said. “I’ve had so many people tell me over the years what an impressive trophy that is.”

The credit union is open to the residents of Jefferson, Orange, Hardin and other surrounding counties.