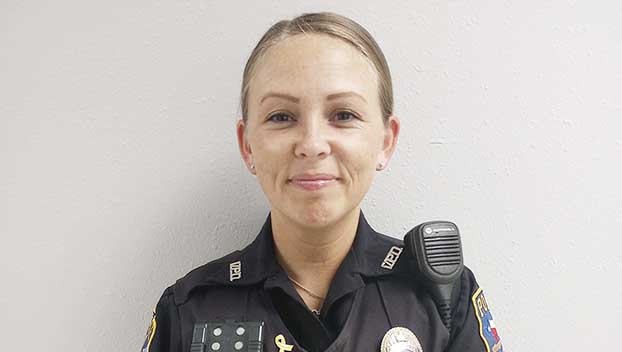 Brittany Haley is a police officer with the Vidor Police Department. (Courtesy photo)

VIDOR — Police Officer Brittany Haley doesn’t remember the exact words she said to a man threatening to jump from an overpass as he experienced a mental crisis.

The 20-year-old man had put both legs over the rail and was holding on by his forearms when he closed his eyes and began a countdown.

“It was more of a reaction than a thought,” Haley said of the actions taken Sept. 15 that saved the man’s life. She had never been in a situation such as this but she knew she did not want the man to jump.

The man, whose name is not being released, was on the Highway 12 overpass over eastbound Interstate 10. When he saw officers approaching he threw his leg over the outside wall and threatened to jump if they got closer, Vidor Police Chief Rod Carroll said.

Haley was across the highway from the man and asked if she could approach. She learned he is struggling with addiction and had been clean for a month. She knew a little about him through past encounters with police.

“It was one of those hard days he felt he couldn’t get through without getting high again and said he would rather die then go through the struggle,” Haley said.

The officer shared she is close with someone going through a similar struggle and believes that’s how they connected.

At that pivotal moment with him on the railing Haley had no idea what was going through his mind. He stopped talking to her, swung his legs over the rail, took a deep breath and closed his eyes.

She thought “he’s about to jump. This is it.”

But in that instant, words were spoken and instead of him falling he went forward.

“I ran to him and grabbed his hands and held them and told him I was proud of him, I know it was a hard decision,” she said.

Haley and other Vidor Police Department officers undergo crisis intervention training, which helps officers deal with a variety of crisis situations from a mother losing a child to someone contemplating suicide, Carroll said.

There were a number of officers at the scene, including some blocking traffic as well as Acadian Ambulance.

“I’m very proud of what they did,” Carroll said. “It shows the human side of law enforcement and why we do what we do. If she had not been there he would have jumped, I have no doubt in my mind.”

Haley would like to take more crisis intervention classes to better be prepared for helping others.

Haley didn’t decide to become a police officer until she was 26. Prior to this she worked in construction. One day sitting in a chair at work she realized she was tired of her job. She looked online at what courses Lamar Institute of Technology offered and saw one for law enforcement and thought, “I’ll try it.”

“I love it,” she said. “It’s the best decision I ever made in my life. God definitely lead me here.”

The man she helped save was able to receive the treatment he needed and is doing well. Haley ran into him the day after the incident and he flagged her down.

“I got out and he had a big smile on his face. No words were said; he gave me a hug and thanked me. He said he didn’t know what he would have done,” she said. “That’s the best feeling I think I’ve ever felt.”