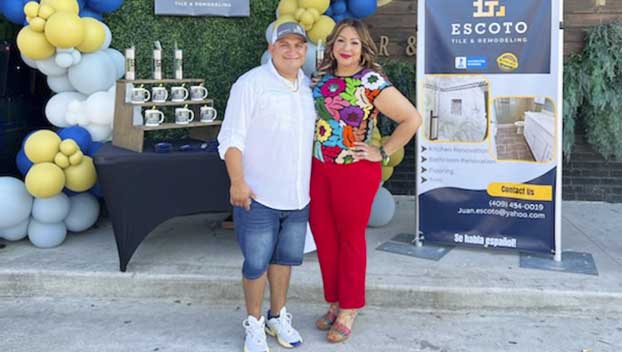 Juan Escoto and his wife Claudett pose for a photo. (Courtesy photo)

Juan Escoto has some advice for people just starting their own business.

Escoto, owner of Escoto Tile and Remodeling, knows it takes perseverance and the willingness to ask for help when needed.

“Never give up,” Escoto said. “There will always be someone willing to provide answers you might need. It might require for you to step out of our comfort zone, but the resources are there, from local city codes and permit department or the Better Business Bureau.”

He also advised others starting their own business to get bonded and insured.

Besides the tile business, Escoto also has a business with his father, Lilo Escoto, and he also owns rental and commercial property in the area.

As a business owner, he has seen highs and lows and has rose back to the top.

A native of Ixtlan, Michoacan in Mexico, Escoto came to the United States in 2001 and started working alongside his father. His former boss, Jorge Castelan, taught him a lot, he said.

“He taught me and my father. I worked for him about four years every day. He was a hard guy, but I learned a lot of things from him,” Escoto said of the tile and construction business.

Escoto branched out with his own business in 2005. He overcame a low spot in his life and climbed back successfully. 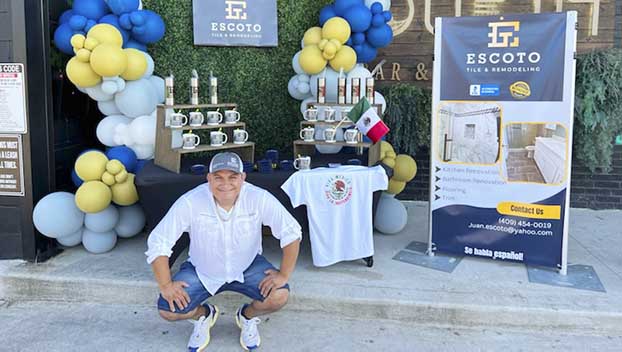 Juan Escoto, owner of Escoto Tile and Remodeling, will be a speaker at Camino al Exito, sponsored by the Hispanic Business Council. (Courtesy photo)

Erika Banda Meza, president of the Hispanic Business Council, of which Escoto is a member, said Escoto is a success story.

He is one of four featured speakers planned for the upcoming Camino al Exito that starts at 5:30 p.m. Sept. 27 at Robert A. “Bob” Bowers Civic Center.

The free event is delivered in Spanish, and the speakers tell of their own paths to success.

Other speakers include Dr. Hector Flores, vice president and dean of students in the division of student engagement at Lamar University; Sharon Portillo, assistant director of behavioral health at The Medical Center of Southeast Texas; and Zilpa Plascenia, owner of Tacos la Chula.

In addition, there will be information tables at the event.

The Council operates under the Greater Port Arthur Chamber of Commerce umbrella and targets existing Hispanic businesses and future entrepreneurs with a goal of getting them more acclimated to the larger working community.

Escoto enjoys being part of the Hispanic Business Council and networking with other business owners. He tries to attend the monthly meetings and learns valuable information during them.

Services offered by Escoto Tile and Remodeling include shower work, kitchens, countertops and floors and remodeling, he said.