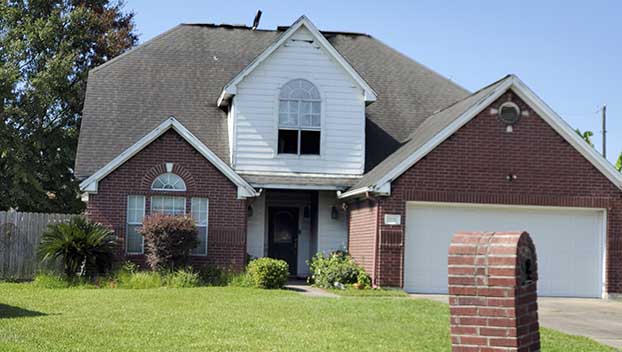 A home in the 7500 block of Live Oak was heavily damaged by a Saturday afternoon fire in Groves. (Mary Meaux/The News)

GROVES — A Groves firefighter was sent to UTMB Galveston for treatment for smoke inhalation following a weekend house fire.

Groves Fire Chief Lance Billeaud said authorities first thought the firefighter was suffering from heat exhaustion but learned he went suffered smoke inhalation. The man was flown to the Galveston hospital for additional treatment and is doing well as of Tuesday afternoon.

Billeaud said the firefighter is expected to make a full recovery and is expected home this week.

The fire happened at approximately 3:30 p.m. Saturday in the 7500 block of Live Oak. Nederland and Port Neches fire department personnel also responded as part of an Automatic Aid agreement.

When firefighters arrived there was heavy smoke showing from the back of the house, Billeaud said. The fire is believed to have started on the back porch, then spread to the attic.

Firefighters tackled the back porch part of the fire before going to the attic.

The family was inside the home at the time of the fire and was able to get out safely, Billeaud said, although the homeowner suffered a small burn to the foot and was treated at the scene.

The home is a complete loss and the family is trying to salvage what they can from it.

Billeaud said the house is big and once the fire hit the air in the open attic, it grew quickly.

The fire chief said there are some sentimental feelings with the house, as he knows the owners helped design the home in 1999.

The cause of the fire is under investigation, though officials do not expect any foul play.