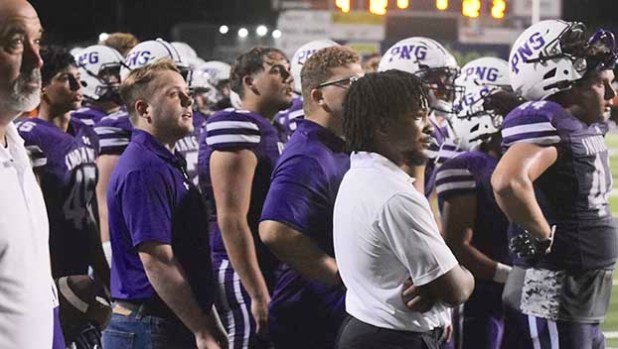 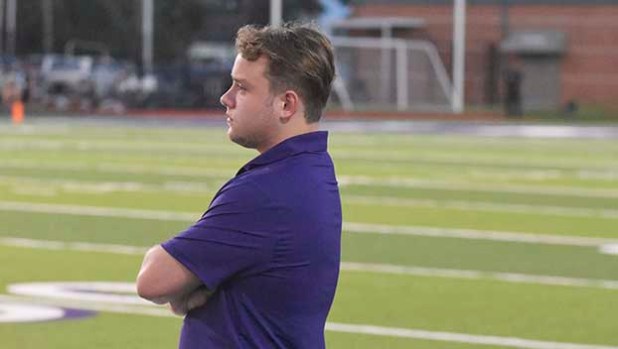 Jackson said he misses playing with his friends but is thankful to be alive. (Chris Moore/The News) 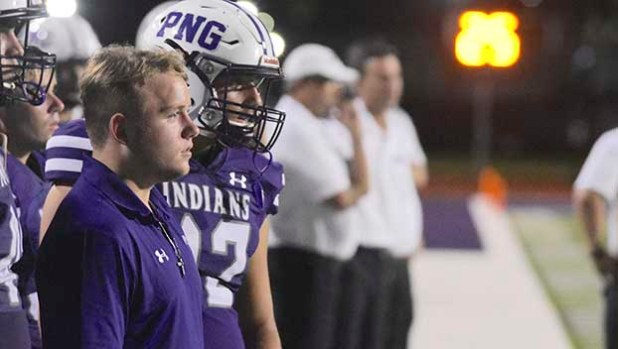 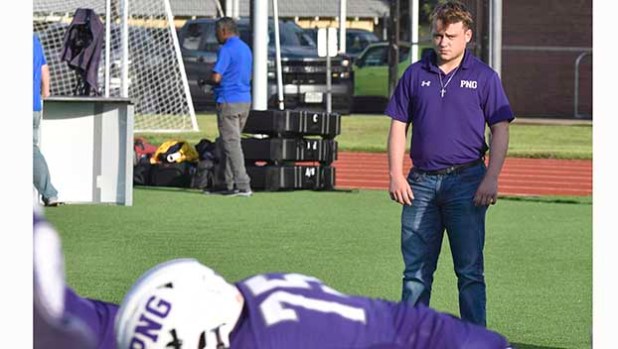 Noah Jackson watches as his friends warm up for the season opener. (Chris Moore/The News)

For seven years, Noah Jackson started the football season by putting on his helmet, pads and uniform and taking the field with his teammates.

From the time he was a little boy he had a plan. His mother Kim Jackson still stares at a picture of Noah as a young child in his Port Neches-Groves Youth Football League uniform.

“He literally stood there saying ‘I’m going to play on Friday nights on that field,” she recalled.

During PNG’s home opener this season against Memorial, Jackson took the field — but his time there were no pads, helmet or uniform. Doctors told the Jacksons Noah was lucky to be alive, let alone walk on the field as an unofficial member of the team 10 months after a serious brain injury suffered in a JV game forced him to be flown by helicopter to a Houston hospital, where he recovered for more than a month.

The gratitude he feels for being alive is real, but does not fully alleviate the sting of having a front row seat to his deferred dreams.

“My main feeling was how jealous I was of them,” Jackson said of watching his teammates warm up before the Memorial game. “I wanted to switch places and be them. At the same time, I was thinking about the other side of how blessed I am to be alive and how football is not all that important, but it is the second worst emotional pain I have ever felt. It is really all I think about for about 90 percent of the day at school. I just keep reminding myself about the good things in life to keep my head straight.”

Part of that emotional healing came by way of his support team.

“(My support system) has done a good job about keeping my mind off of things,” Jackson said. “I couldn’t thank my trainers and therapists enough. I love them. Without them, I wouldn’t be nearly as close to where I am now.”

Jackson said he talked with the team’s trainer Ricardo Serna about his new role on the team.

“Me and him talked for a good 15 minutes and he told me a lot of stuff,” Jackson said. “He told me that he wants me to be involved with the team in every way possible. I feel like that was pretty important to me. There is nothing I want more than to be on the field on Friday nights with them.”

Jackson spent the summer working out with the team. It was the first time he had pushed his body outside of his physical therapy.

“I was thinking if I would be able to do it,” he said. “I didn’t want to do it, but I made myself do it. It was really hard. I found out later in the summer I wasn’t supposed to be in the heat like that, which is why I was getting sick. Physically, I didn’t think I was capable.”

During the games, Jackson can be found on the sideline among the team. He usually stands next to the same friends he did when he was playing.

“When we have the ball and we are driving it down the field, I am just jumping up and down,” he said. “Nothing makes me happier. It is sad when we lose, though.”

One of his best friends, Dylan Talbert, wore Jackson’s No. 41 during a scrimmage. Jackson said the gesture put a smile on his face.

The junior still works out but said it is more difficult to find time to do it with his friends and workout buddies having football practice almost every day. He said his main goals are to build his strength and try to get back to where he was physically before the injury.

Jackson said he plans to be on the field cheering for PNG each game this season.