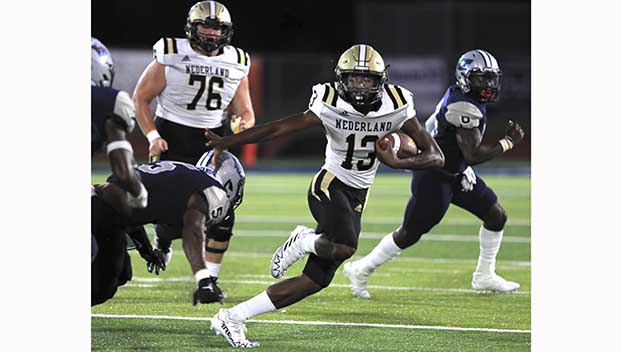 Nederland's Hubert Thomas runs the ball against the Mustangs. (Mark Pachuca/Special to The News)

Nederland sophomore Hubert Thomas made his presence felt in the Bulldogs’ 42-21 loss to Memorial last week.

The Bulldogs stunned the Titans in the first half, going into the locker with the game tied at 21-21. As the second quarter played out, Memorial assistant coaches were on the sideline asking the same question.

By that time, Thomas, who plays running back for the Bulldogs, had broke off two long touchdown runs on his way to 173 yards and two touchdowns. His runs helped stun the Titans defense with a tie game going into halftime.

Memorial jumped out to a 14-0 lead on Nederland before Thomas broke free for a 75-yard touchdown to bring the Bulldogs within a score.

A few minutes later, Thomas was running through the Titans’ secondary again, this time for 69 yards to tie the game at 14-14.

“It felt pretty good just to get out there and run,” Thomas said. “During practice I was hurt and didn’t get to do much.”

Thomas said once he broke through the line, his only concern was not getting caught by the Memorial defense. The running back showed good balance and vision in the game against the Titans and the Bulldogs’ first game against West Orange-Stark.

The sophomore said his ability to see running lanes is likely his best attribute.

“Everyone obviously talks about the two long touchdown runs, but he had a couple of runs in that game that were 6-7 yards that could’ve easily only been 1-yard gains,” Barrow said. “He stayed low, got behind his pads and didn’t go down on first contact. That is the guy I remember running as a freshman.”

Barrow said Hubert should feel strong after his early performances.

“To be able to do that on a Friday night, it should help his confidence,” he said. “He knows he can be the guy in the backfield on Friday nights… People see it on video or in the game, but we get to see it in practice every day. We see it in the individual as a young man. You see how he walks out of the dressing room, walks in the hallway and how he sits in the classroom. That is a big part of coaching, to be able to see those things in your players.”

Thomas said his only personal goal for the season is to make a name for himself and be the best back in the district.

He was certainly able to accomplish that after Friday’s game.

While players were hanging out around the locker rooms, Memorial coaches called Thomas over and told him how impressed they were with his performance. The running back will try to maintain his production against Silsbee in the Bulldogs’ third game and final non-district contest.