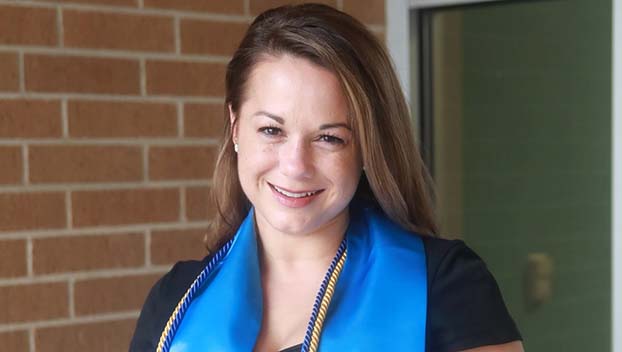 Casey Flitcraft stood on stage, tightly gripping a small statuette that represented one of the top nursing student recognitions internationally, the DAISY Award.

It felt like the perfect start to her dream career.

Six months earlier, exactly to the day, she sat in shock on her front porch in Winnie. It seemed as though her world had just come to an end.

Flitcraft was one of 30 Licensed Vocational Nursing students at Lamar State College Port Arthur who recently received a special pin in a ceremony honoring those who had completed the LVN course.

At the conclusion of the event, Allied Health Director Shirley MacNeill called Flitcraft back to centerstage at the Monroe Performing Arts Center to receive the DAISY Award, a recognition for the top nursing students, instructors and practitioners from across the country.

Flitcraft valiantly fought back the tears, but it was a battle she was losing. The emotions were a combination of happy and bittersweet. Her moment of accomplishment was tempered by an incredible sadness over a special someone who could not be there to share in the moment.

While her children presented her LVN pin to her earlier in the ceremony, it was her husband, Greg, who was missing.

Flitcraft remembers Greg had complained the night before that his back was hurting badly. The next morning, it was his incessant phone alarm that woke her. She kept hearing the alarm and realized he wasn’t in bed with her. She looked on the floor; Greg wasn’t there.

Her search took her to the bathroom. She found Greg lying there, facedown, motionless. He had been there for hours. It had been a heart attack and it was immediately evident that there was no chance of reviving him.

“I was a medic in the Army Reserves. I work as an emergency room tech,” she said. “But I was there in the bathroom with him, and I was in shock.”

The couple’s adult son happened to be staying the night and heard Flitcraft’s calls for help. He came in, and quickly realized the situation. “Momma, I need you to calm down,” she remembers him telling her. “We need to get you out of the house.”

Flitcraft went out on the front porch of her home in Winnie, waiting for Paige, a good friend who is also part of the LSCPA Nursing program. “I just kept thinking, ‘Oh my god, these babies just lost their daddy.’”

The next week was a blur, as far as Flitcraft can recall. She missed that week of school with Greg’s funeral taking place. As she came into the church for the services, the presence of her LSCPA nursing instructors and fellow students in the pews was not lost on her.

“They cancelled classes the day of the funeral. There were two pews of people from the school there for me,” she said. “Without my instructors and my classmates, I couldn’t have done it. That program absolutely saved my sanity.

“How could you carry on? How could I have not? The instructors made sure I persevered and that I was as OK as I could be in that situation,” she said. “I’m from northern Louisiana so I don’t have my momma down here. Those instructors were my mothers.”

When the Monday after Greg’s funeral came around, Flitcraft put on her scrubs and headed back to class.

And she kept moving forward through more exams, clinicals and, ultimately, state boards.

“Greg was the main income for us as a family,” she said. “He worked overtime, doing everything he could to keep us afloat while I was in school. Financially, I had no option but to keep moving forward in school.”

After working for Baptist Hospital’s emergency room as a technician, she is now joining the LVN crew at the same facility.

“They’re sticking with me after all this,” she said.

It’s impossible to completely put aside something like the loss of a spouse and Flitcraft said Greg is always with her, whether it be in her memories or in the faces of their children.

But she is looking forward as well, planning to join LSCPA’s Upward Mobility (LVN to RN) program with the goal of eventually becoming a nurse practitioner specializing in psychiatric care.

“You can’t be scared,” she said. “Fear is the main thing that holds us back, the fear of failure. Life is not perfect. The road we walk is full of potholes. You have to keep going. You can’t quit.”