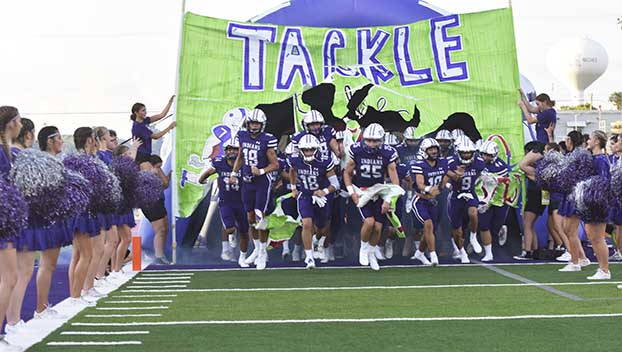 BEAUMONT – What a difference a week makes. After struggling in the season opener last week, Port Neches-Groves looked like a completely different team in routing Beaumont United 49-0 in non-district football action Friday night at Memorial Stadium.

“The first win feels great and it’s awesome to get that out of the way,” said PNG head coach Jeff Joseph. “It feels like we’re learning how we are going to operate, and how we’re going to operate in practice. It’s the coaches as much as it is the players.

“Our kids busted it in practice this week and really got after it. We had a bunch of selfless guys that ran the scout teams for us all week.”

Senior running back Tommy Reed led all rushers with 138 yards on 21 carries. He also added a 28-yard TD reception. Senior Cole Crippen completed 14 of 21 passes for 197 yards and three touchdowns. Julian Lopez had five catches for 77 yards and a touchdown.

“We have a really good offensive line and we’re going to highlight them and lean on them as much as we can,” said Joseph on the offensive execution. “They did a really good job with our game plan and executing. We need to clean up some of the penalties we had tonight.”

Not to be out done was the Indians defense, who kept the Timberwolves off the scoreboard. United was able to muster just 81 yards of total offense — 40 rushing and 41 passing.

“Manny Ogden did a great job running the scout team offense, earning praise for our defensive coaching staff for how he was able to run the opponents offense to get our defense ready for the game tonight,” said Joseph. “From last week to this week, being able to teach off real game video was really helpful. We obviously have a long way to go, but we’re going to have to keep making these strides going forward. That will determine how good we can be this season.”

Starting the second half with a 21-0 lead, PNG picked up where it left off. Crippen hit Reed on a 28-yard touchdown to extend the Indians lead to 28-0 with 7:44 left in the third quarter. A Torryan Hinton interception set up the scoring drive.

Crippen connected with Lopez on a 28-yard scoring strike with 1:38 left in the third quarter. United misplayed the ensuing kickoff, letting the Indians recover the kick. PNG didn’t waste the opportunity. Crippen hit Shea Adams for a 13-yard completion. Backup running back Blair Chatagnian closed out the drive with a 1-yard TD run with 10:58 left in the fourth quarter.

PNG (1-1) closed out the scoring with a drive led by the second unit. Isaiah Nguyen capped it off with a 5-yard TD with 6:54 left in the game to close out the scoring and provide the final margin.

PNG looked more like itself on their opening drive of the game. A steady diet of Reed mixed in with an occasional pass was the recipe for the game’s first score. Reed carried four times for 35 yards on the drive.

A Crippen pass to Julian Lopez for 18 yards set up the Indians with first and goal at the United 7. Adams carried the ball twice, the last of which went for a 1-yard TD to give the Indians a 7-0 lead with 4:23 left in the first quarter.

The Indians defense forced a punt on the Timberwolves’ ensuing possession. Crippen was intercepted deep down the middle on PNG’s next drive to open the second quarter.

The two teams exchanged punts early in the second stanza. The Indians defense stuffed United’s Athean Renfro on fourth-and-one for a 1-yard loss as United turned the ball over on downs at their own 43.

PNG did not waste the good field position. Crippen hit Chance Prosperie for a 12-yard completion on fourth-and-six to keep the drive going. Runs of 5, 5 and 12 yards by Reed put the ball at the United 5. Adams scored on a 5-yard TD run to push the Indians lead to 14-0 with 3:04 remaining in the second quarter.

After the Indians defense forced another three-and-out, PNG’s offense went back to work with 1:32 left in the first half. Crippen hit Lopez with a 13-yard completion to get the scoring drive started.

After the center snapped the ball before Crippen was ready, Reed picked up the ball off the turf and turned what could have been a disastrous play into a 12-yard run. A personal foul penalty for a late hit added 15 yards to the play. Crippen hit Prosperie for a 31-yard scoring strike to give the Indians a 21-0 lead heading into the locker room at halftime.

Tommy Reed scooping up the ball laying on the turf after a bad snap and turning it into a 12-yard gain. That led to a 31-yard TD pass from Crippen to Prosperie on the very next play from scrimmage to give the Indians a 21-0 halftime lead.

Senior Cole Crippen completed 14 of 21 passes for 197 yards and three touchdowns. The offensive line was just as important, providing terrific pass protection all night long and opening big holes in the running game.

PNG had 442 yards of total offense, 237 rushing and 205 passing. Chance Prosperie had five catches for 63 yards and a TD. Shea Adams had four carries for 43 yards and 2 TDs and caught two passes for 24 yards. Isaiah Win added 38 yards on six carries and 1 TD.

United QB Jonathan Martin completed 8 of 17 passes for 41 yards. He also had 29 yards rushing on 13 carries. Jaylon Moore had three catches for 21 yards.

Port Neches-Groves stays on the road to close out the non-district portion of its schedule with a 7:30 p.m. game next Friday at West Orange-Stark.

Beaumont United hosts Alvin next Friday in a 7 p.m. kickoff.