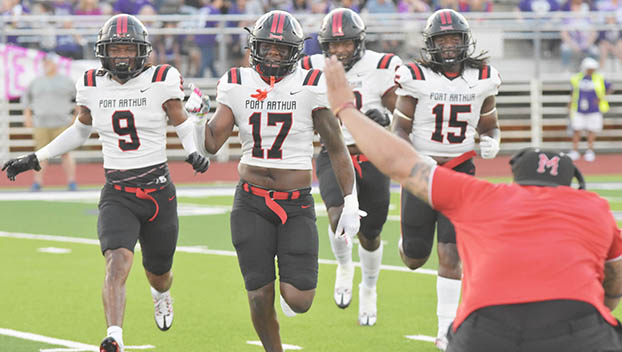 The Memorial Titans are riding high off their impressive victory over Port Neches-Groves in the season opener last week.

To the average spectator, the Titans played a near-perfect game in their 50-15 win, but Memorial Head Coach Brian Morgan said the film revealed plenty of room for improvement.

“The result was really good, and there were some really good plays and highlights, but we legitimately have a lot of things to get better at,” he said. “I don’t think there was one position on the field where they did perfect. There were some low grades Friday night. The result was good, but we have to get a lot better. That is for dang sure.”

That road to improving starts Friday when the Titans take on the Nederland Bulldogs at Memorial Stadium. Kickoff is set for 7 p.m.

Morgan pointed out a few areas that need to show improvement against the Bulldogs.

“The offensive line has to play better than they did,” he said. “The backs, (Ja’coryn) Baker had some good runs. Both Baker and Amante (Martin) had some mental busts. They are young and will do that a little bit. On defense we had some misalignments. (Iles) misaligned on some stuff. The d-line has to get better.”

The Titans will face a Nederland team hungry for a win after the Bulldogs fell 32-0 to West Orange-Stark. Morgan said this week’s game will closer than last week’s score indicates.

“(Nederland Head Coach Monte Barrow) does a good job of game planning and getting the most out of those kids, too,” Morgan said. “I know they are young, but I fully expect them to play really, really hard. That has always been their MO. I have always respected that those kids play hard, run to the football and strike you. They have some kids playing both ways that are tough kids.”

The Memorial coach said his team is going to have a battle at the line of scrimmage.

“They have a couple of big bodies up front and on the d-line that we are going to have to block,” he said. “It’ll be a good test, contrary to what people believe, based on last week’s results.”

Nederland will have to find a way to slow down Memorial quarterback Davion Wilson, who rushed 17 times for 97 yards and four touchdowns along with passing for 138 yards against PNG.

The Bulldog defense will try to bounce back after struggling to contain WOS quarterback Keyshawn Robinson last week.

Nederland did get a good performance out of sophomore running back Hubert Thomas and could lean on his legs to control the ball and keep it out of Memorial’s hands.

This will be the last game of non-district play for the Titans, who will have a bye next week.