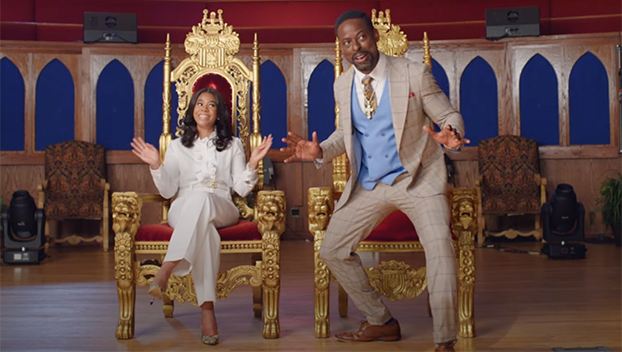 “Honk for Jesus: Save Your Soul”

The new movie “Honk for Jesus: Save Your Soul” is a satire that pokes fun at the culture surrounding Southern Baptist mega-churches.

The barbs may hit a little too close to home for some, but it’s still a lot of fun, and most importantly, stars Sterling K. Brown and Regina Hall in the central roles.

These two actors are fully committed to the film’s silliness and are the reason why “Honk for Jesus” turns into something more than just another toothless satire.

Brown stars as the pastor of a mega-church that lost all but five of his parishioners due to a scandal. Hall plays his dutiful wife who does her best to support her peacocking holy man of a husband.

The idea is that they’ve invited a camera crew in to document their “ultimate comeback” as they try to rebuild their church. It turns out that there are a lot of fun moments to be had watching the couple desperately trying to convince the world that everything is OK at the Welcome to Greater Paths Baptist Church.

Hall and Brown are gifted comedians, and they are very good here, especially for Southern audiences who are adept at understanding the underlying meaning behind a line of dialogue like “Bless your heart.”

Nicole Beharie and Conphidance are also spot on playing the leaders at a rival mega-church. Their fight for religious dominance provides the film with some of its best moments.

Not content to be a straight-forward satire, the film also tries to show us the inner turmoil roiling inside these spiritual leaders. Hypocrisy and duplicity seem to hide just behind their holy folk masks.

I appreciate the filmmakers’ desire to give the movie some dramatic heft, but unfortunately, these moments are nowhere near as effective as the comedic scenes.

Perhaps that’s because the film, which was based on a 15-minute short, doesn’t really seem to have much to say above and beyond the points made in the original film.

Critiquing the hypocrisy of a prosperity gospel minister is an easy task. Hall and Brown give the film some nice polish, but it’s a lot of sizzle and not much meat.

Then again, sometimes the sizzle is enough.

“Honk for Jesus: Save Your Soul” does have some very funny moments, and it does make a few sly points about organized religion in the Bible Belt. This is one of those films that gets stuck trying to serve two masters. It should have either committed to being a no-holds-barred satire or a genuine look into the hidden lives of these characters.

“Honk for Jesus: Save Your Soul” flounders because it tries to do both, and even the superb performances by its cast aren’t enough to elevate the film into something special.

ASK A COP — Can you drive in your underwear?