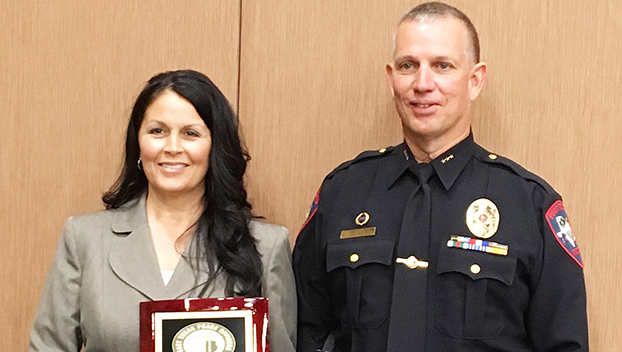 PORT NECHES — Leaders in Port Neches will soon choose a new police chief — one who will make history, not only in Port Neches but in all Greater Port Arthur and Mid County.

“We have concluded the interview process for Chief (Paul) Lemoine’s replacement, and at our next city council meeting, my recommendation will be Cherì Griffith be appointed to the position of police chief upon Chief Lemoine’s retirement,” City Manager Andrè Wimer said.

The meeting this week was canceled, as there is an expected lack of quorum. The next meeting date is Sept. 15, he said.

The chief said Griffith received recognition in her career with investigations, thoroughness and professionalism.

Griffith was involved in investigating a case of “swatting,” where an Oklahoma man made a false bomb threat that sent first responders to an address in Port Neches.

Parker Ryan Little pleaded guilty in federal court to the phone number spoofing that led to a 2.5 hour SWAT incident in 2016.

Lemoine said Griffith identified Little as the person who made the call and she received a commendation for her work.

Griffith and Detective Scott Thompson were recently recognized by the U.S. Department of Homeland Security for their support and assistance in the investigation and prosecution of Brian Orlandella in the District of Massachusetts.

After a six-day trial in April, a federal jury found Orlandella guilty of sexual exploitation of a child and transfer of obscene material to a minor, according to court documents.

Orlandella’s conviction “culminates a multi-jurisdictional investigation that identified an online predator who exploited the most vulnerable of our society — a 13-year-old child.”

At the time of the incident Orlandella was working as an assistant chief probation officer in Beverly, Massachusetts, and had sent sexually explicit material to a juvenile in Port Neches.

Chief Lemoine announced his retirement earlier this year. He plans to stay on until some time in October. Should council approve the recommendation, Griffith will take over when Lemoine leaves.