CHRIS MOORE — Titans earn respect with No. 6 ranking; can they keep up momentum? 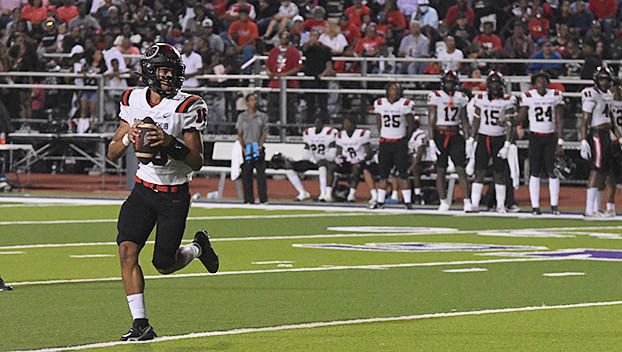 The Memorial Titans ran away from the competition in Week 1, earning the squad attention across Texas and a new state ranking. (Chris Moore/The News)

Before the year started, Dave Campbell’s Texas Football Magazine had the Memorial Titans listed as a team that could make some noise in the playoffs but failed to rank in the Top 25 for 5A Division I.

The magazine also had Port Neches-Groves listed at No. 17 for 5A Division II.

After the Titans’ 50-15 victory Friday over PNG, the publication jumped the Titans up to No. 6 in the state.

The Titans showed up in all three phases of the game. Special teams forced turnovers, and the defense picked off PNG and scored a touchdown. The offense also moved at will.

Rankings are meaningless, and that is a sentiment I am sure many, if not all, coaches share. Some use them for locker room discussions and try to get players fired up because they are ranked too low, but teams still have to win games on the field.

However, after being on the sideline for the Titans win, it is obvious the squad is good, with a lot of room to improve.

Quarterback Davion Wilson ran with power, and the supporting cast might be as good as the Titans have seen in the Brian Morgan era.

The Titans are in a more competitive district this year with Crosby and Barbers Hill moving up to 5A Division I.

How the Titans handle recent success will determine how far they go. Last year, the Titans had a similar start to the season with a big win over a ranked Lancaster.

The Titans beat Barbers Hill and fell to Crosby in non-district games. Afterwards, Morgan said his team was not in the right place mentally.

Hopefully, this year is different. When talking to Wilson for a profile this week, he mentioned trying to help get the Titans past the first round, where their seasons have ended in recent years.

Even after the big win, Morgan said his team has a lot to clean up, adding they were far from a perfect grade in Week 1.

The Titans play Nederland this week before enjoying a bye with district play looming.

Whether or not Memorial lives up to the new hype will likely be determined in the next few weeks. In Texas high school football, consistency is key. It is not enough to have an impressive season opener.

To get to where the Titans want to go, Memorial must continue to have an impressive season and hope that turns into a deep playoff run.

Chris Moore is the sports editor for Port Arthur Newsmedia. He can be reached at Chris.moore@panews.com.