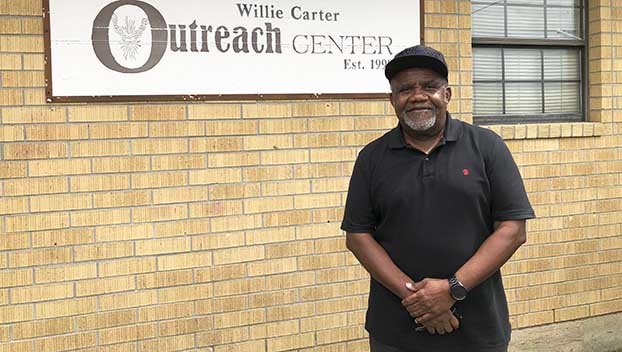 For those at the Willie Carter Outreach Center, community service is a large part of the mission. The facility, which provides free recovery services for those that struggle with substance abuse or mental health disorders, finds the act of giving back instrumental in recovery.

And for that reason, the group was excited to receive a grant from Port Arthur LNG as part of its Environmental Champions initiative.

In partnership with The Port Arthur News, Port Arthur LNG dispersed $55,000 to local nonprofits working to better their community.

In addition, they reached out to the city’s Parks and Recreation Department for assistance, which enabled them to do a little more than originally intended.

“By them stepping in and helping out, we were able to change all the boards on all the bleachers out there that were in real bad shape,” Hulin said. “They didn’t get painted because they were treated lumber and you have to let that cure for a while, but we do plan on going out there and finishing that at a later date.”

The group went to the park for two weeks, carrying five-gallon buckets of water for the plants.

But approximately two weeks before the city’s Juneteenth event, with which the Carter Center also participates, their work had been vandalized.

“I passed by there and on the north side of the park, there was just a big hole there where all the plants were,” Hulin said. “Somebody had completely pulled them up. But at some time we’re going to go back and try one more time before the fall to get the plants in there.”

The Carter Center oversees several community service projects each year, including the city’s largest back-to-school event in which 1,500 students get free backpacks filled with school supplies.

“One of the focuses of recovery and one of the main points is that eventually you reach a point where you get your spiritual man, then you get your physical man in order, and if there’s an opportunity for you to continue to grow, then you go back,” Hulin said. “All those individuals that you may have harmed, you have a responsibility to go and make amends for the harms that were done. And part of that is doing more than just saying, ‘I’m sorry.’

“It’s about how can I physically make restitution for the harms done. And there’s no better way than to go in and physically do something, especially for your community.”