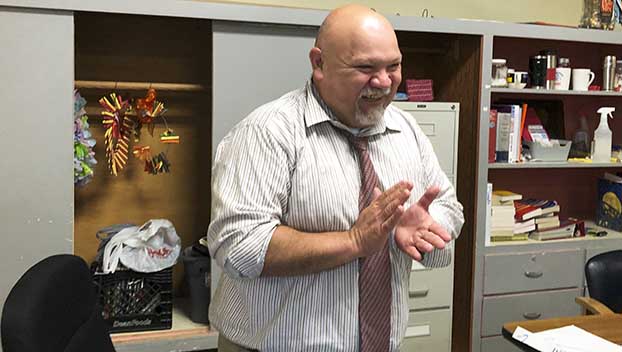 Salvador Rivera is a native of South Texas and came to Port Arthur nearly seven years ago to work for Bob Hope Schools. (Monique Batson/The News)

Salvador Rivera was in attendance last year when his first group of students from Bob Hope Schools received their high school diplomas.

And it was a similar situation that initially led him into the field of education.

“I used to be a teacher aide, and then I became a permanent substitute,” he said. “I was working for five years. I would see my old students, and they were really proud to share that they had graduated, and I thought that was really rewarding.”

Nearly seven years ago it was a who that brought the South Texas native to Port Arthur.

“My niece was working for this campus, and I had a math degree,” he said. “She recommended me for this position. She was already teaching here and really enjoyed the kids and helping out the Hispanics in the area.”

And his work since earned the seventh grade math teacher at Bob Hope Middle School the title of Teacher of the Month sponsored by Philpott Motors, which comes with a $500 gift card.

“Mr. Rivera is a dedicated, professional who enjoys teaching,” said Campus Director Tiffany Parker. “He has a very pleasant, inspiring demeanor, which his students acquire and respect. Mr. Rivera leads a high engagement classroom in which students work respectfully with one another. His ability to speak two languages enables Mr. Rivera to communicate with his students while supporting our dual language program.” 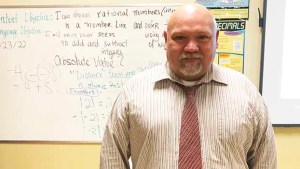 Still, it’s a universal language in which Rivera excels.

“Math has always been something I really liked,” he said. “As a child I would tell my mother I didn’t like the letters, I only like the numbers. And it seemed easier for me to do math, and I really like working with numbers.”

He said the biggest challenge is finding a way to fill in the gaps some students may have encountered in math prior to entering the seventh grade.

“I found that once you work with them one-to-one and provide all the support they need, they are successful,” he said.

“Bob Hope School was also named the highest-ranking school district in Region V because of teachers like Mr. Rivera,” Parker said. “I am proud to say that Mr. Rivera is a part of our Bob Hope School Family.”

However, Rivera said he’s only a small part of the success.

“It’s a group effort,” he said. “All of our teachers are involved. The administration is involved. And it’s an effort that’s combined with parent involvement, the children, the teachers, the administration and our school board. They’re always looking out for us. I really love working here.”