Receiver Chance Prosperie joins several other starters who return from last year’s team, which made a deep playoff run. 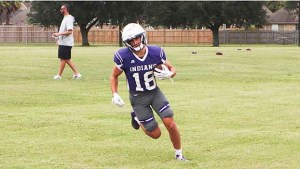 Earlier in the week, Head Coach Jeff Joseph said his receivers have to win on-on-one matchups against the physical Memorial corners in order for the PNG offense to have success.

Those who like intense receiver-corner battles should keep an eye on Prosperie and Memorial defensive back Jelani Chevalier. Both were named first team all district last season, with Prosperie earning a spot on the all state third team for Class 5A.

PNG’s success could come down to how many times Prosperie and company can get behind the Titans secondary.