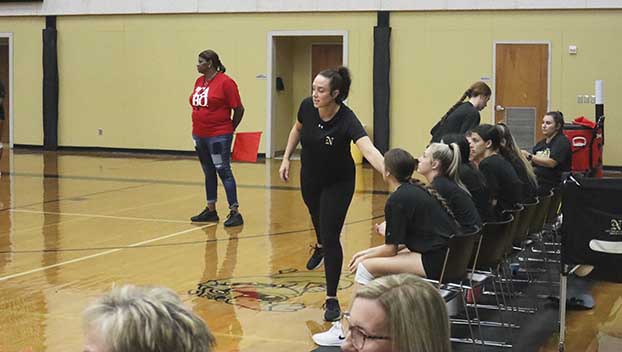 NEDERLAND — The Nederland volleyball team strung together six wins in a row heading into the weekend.

The team decided not to participate in a tournament this weekend to allow players to heal before district play begins Sept. 9.

Nederland’s record took a beating in the first part of the season when the Bulldogs participated in a competitive Pearland tournament. While the Bulldogs went 0-6 during that span, Nederland gained confidence.

“A lot of people saw the record but did not see how many sets were close,” Crommett said. “We were very competitive against really good 6A and 5A schools.”

The coach said her players were able to see they could keep up with good schools, and losing those games consecutively was a “wake-up call.”

The team responded with a winning streak to even its record at 7-7.

Crommett said Sydney Nelson’s play stands out after taking over for Audrey Johnson, who should rejoin the team next week.

The coach also praised seniors Ava Wiltz and Ava Whitehead for their consistency, along with Kamryn Smith.

“We had a lot of players in positions that they never took reps at before,” Crommett said.

Nederland jumps back into action for a match against Vidor on Tuesday. The Bulldogs will have two more home games (Bridge City, Sept. 2 and Santa Fe, Sept. 6) to close out non-district play.

Nederland also competes in the Santa Fe tournament in an attempt to get “quality reps” in before district play starts against Baytown Sterling.